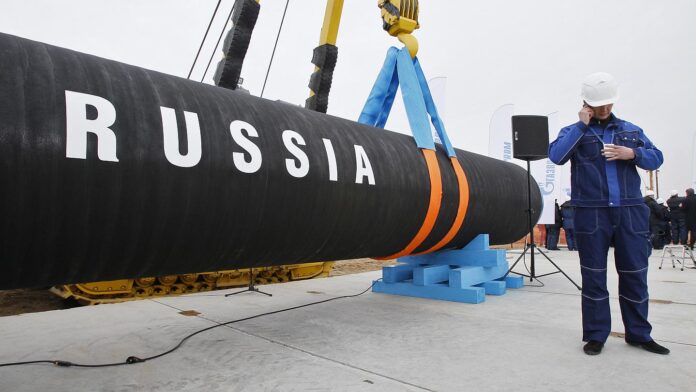 CEM REPORT | The EU is proposing a new round of sanctions on Russia.

The sanction proposed by the Commission’s President, Ursula von der Leyen, will place a phased oil embargo on Russia, as well as sanctions on its top bank and also ban Russian broadcasters from European airwaves.

The sanctions if agreed by the EU member states will be its toughest measures yet to punish Moscow for its war in Ukraine.

Reuters reports that Von der Leyen explained to the European Parliament in Strasbourg, that the measures include phasing out supplies of Russian crude oil within six months and refined products by the end of 2022 adding that Moscow must face consequences.

“Putin must pay a price, a high price, for his brutal aggression,”

“Today, we will propose to ban all Russian oil from Europe,”

The head of the EU executive also pledged to minimise the impact on European economies especially countries who depend largely on Russia’s energy.

“We are addressing our dependency on Russian oil. And let’s be clear, it will not be easy because some member states are strongly dependent on Russian oil, but we simply have to do it,”

Member States consisting of 27 governments will be expected to adopt the Commission proposals as early as this week, allowing it to become law.

Although, Hungary and Slovakia have been allowed exemption from the embargo until the end of 2023, due to their high dependency on Russian energy.

The proposed sanctions, if consented to would follow the United States and Britain, who have already imposed bans cutting off Russia’s economy largest income streams, as they buy more than half of its crude and petroleum products from Russia.

Ecological Transition Minister Barbara Pompili and the European Commissioner for Energy, Kadri Simson, said the 27 member states were united with Poland and Bulgaria and would stockpile gas to be prepared for a breakdown.

Furthermore, the European Union (EU) has warned member states not to crave into Russia’s demand that gas imports be paid for in rubles but rather prepare for a possible complete breakdown in gas supplies from Russia,

“What has happened today is that the European Commission and the presidency have confirmed that paying in rubles is unacceptable, that it is a breach of sanctions and a breach of European solidarity,”

“Many countries, including the Baltic states, Denmark, the Netherlands and Finland, have today reaffirmed solidarity and that they will certainly not pay in rubles,”

Although some member states have demanded further clarification from the European Commission’s experts.

“I think the clarification is still ongoing … it is a complex process.”

“I mean, paying with one currency is one thing, but if that involves another country’s central bank, then it becomes part of a different part of the package, and that is going to be a bit tricky.”

The Czech minister of industry and trade, Jozef Sikela, said he had asked for a “clear explanation of how to proceed”.

On reports that Italy wants to continue to pay in rubles until there is a legal alternative.

European Commissioner for Energy, Kadri Simson, said she had spoken to Italian minister Roberto Cingolani, who did not attend the meeting, and that the report was “misleading” — but she promised to provide him and all EU capitals with clearer guidance on resisting Putin’s ultimatum.

She added that Russia’s actions showed “they are not reliable suppliers and that means that all the member states have to have plans in place for full disruption”.

Recall that CEM reported Russia’s policy which implied that its energy client pay in rubles, a way to ease financial sanctions against its central bank. It has cut off Bulgaria and Poland after their firms refused to comply.

Although several countries are to renew supply contracts at the end of May and reports suggest some could seek to work around the sanctions by following the method put forward by Mosco, Guardian reports.

“In the short term it might leave Russian revenues high while implying negative consequences for the EU and the global economy in terms of higher prices – not to mention retaliation risks (by Russia) on natural gas supplies,” he said.

The sixth round of anti-Russian measures will also target the country’s largest bank, Sberbank, which will be excluded from the global banking communications system SWIFT,.

“We de-SWIFT Sberbank – by far Russia’s largest bank, and two other major banks. By that, we hit banks that are systemically critical to the Russian financial system and Putin’s ability to wage destruction,” von der Leyen said.

“This will solidify the complete isolation of the Russian financial sector from the global system,” she said.

“You are not getting away with this,”

Also State-owned Russian broadcasters RTR-Planeta and R24 are among those proposed to be shut out of European airwaves, diplomats said, although Von der Leyen did not give details in her address to parliament.

The EU’s chief executive also proposed a recovery plan for Ukraine once the conflict ends, saying there was a need for hundreds of billions of euros in funding to rebuild the country.

“Eventually, it will pave the way for Ukraine’s future inside the European Union,”

Moreso, European football’s governing body, UEFA, recently announced ban on Russian clubs from the Champions League and all other European competitions next season, acording to a report by News Band.

“Russia will have no affiliated clubs participating in UEFA club competitions in the 2022/23 season,” according to a statement.

The statement also confirmed the Russian Women’s team’s exclusion from the European Championship hosted by England in July, stating that Portugal will be taking its place.

Recall that, Russia’s invaded Ukraine by land, sea and air on Feb. 24.

Ever since International Communities and Bodies including the US and UK have imposed series of sanctions to punish and force Russia out of Ukraine bit it has stood Its ground.