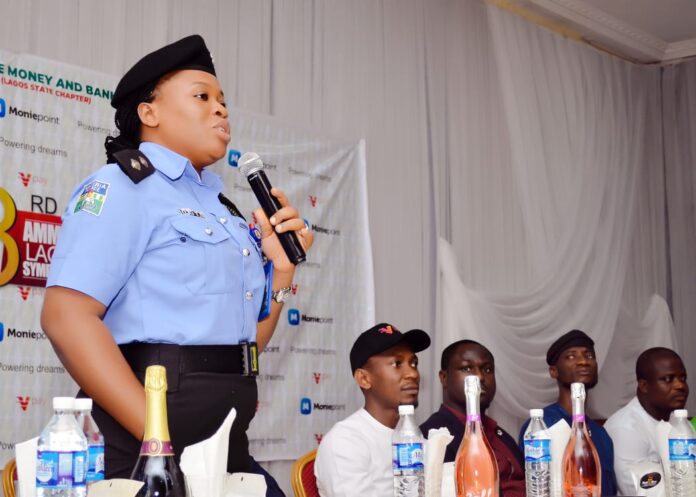 CEM REPORT| Members of the Association of Mobile Money and Bank Agents in Nigeria, AMMBAN have distressfully appealed to Nigerian Police to come to their rescue as they continue to face armed robbery and other criminal attacks and hostilities.

POS operators made the appeal at a symposium held Thursday 28th April by the Lagos Chapter of AMMBAN at the LCCI Conference and Exhibition Center, Alausa, Lagos.

Present at the Symposium were the Police PRO, ASP Ojo representing the Commissioner of Police for Lagos State, Mr Abiodun Alabi, Mr Victor Olojo, National Chairman of AMMBAN and other top industry stakeholders

POS operators enumerated the series of security risk they face in the course of their daily operations. These include hostilities from customers in the case of failed transaction that sometimes extend to direct fight, attack on POS machine and even arrest.

Armed robbery attacks on the financial inclusion facilitators have heightened recently with losses running into millions on a single attack and hundreds of millions on the aggregate. There have been incidences of ultimate fatality as reported by dailies such as the killing of one Mr Lawal in Ibadan, reported by the Cable.

POS operators lamented their helplessness as the police seems to be doing less to protect them.

ASP Ojo responded and asked operators to provide the right information timely to enable the Police perform their functions of investigating incidences, apprehending and prosecuting culprits.

‘’The public has a lot to do to enable the Police perform optimality in settling issues of failed transactions by reporting incidence promptly to the Police. We are not magicians, the police are not miracle workers. We work with information, when the information is given in adequate appropriate time”; Ojo said

A victim of armed robbery at Iba area of Lagos State narrated her sad story how the Police failed to save her business even with live evidence of ongoing attack on her shops where she operates her POS and recharge card businesses.

Attacking a POS operator by a customer for a failed transfer became very topical at the symposium. According to some Operators, they have been arrested by customers for a transfer that didn’t go through whereas they expected the police to understand their non involvement in a failed transfer. For this, they appealed to the Police to exercise some restrain in responding to customers arrest request since they have no input in the success or failure of transfer transaction.

For effective strategic collaboration with the Police, Executive of AMMBAN and other stakeholders called on all operators to come under the umbrella of the association. This they said will make lodgment of complaints and follow up effective.

The need for adjustment in laws guiding the Nigerian Police to effectively deal with the security challenges in the financial inclusion drive came to a fore as existing ones seem to be impeding into the needed actions inline with sophistication and swiftness of present crime. Such is the adjustment of ‘jurisdictions’ guidelines in the Nigerian Police.

The National Chairman of AMMBAN, Mr Victor Olojo called for more regimented industry in response to the exponential expansion as is being experienced currently. He called for more State chapters while encouraging the existing ones to follow the Lagos chapter closely in their progress.

Mr Olojo said; ‘’with the bustling influx of POS agents, springing up in their hundreds on a daily basis, the need for more regimented industry has become more obvious and expedient.

‘’I commend the Lagos State Chapter of AMMBAN for their pace setting by their robust collaboration even with the Nigerian Police.’’