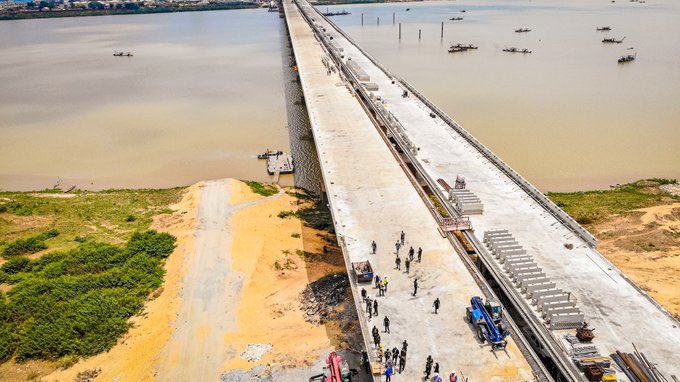 CEM REPORT, INFRASTRUCTURE | Properties owners within the Right of Way (RoW) corridor leading to the Second Niger bridge have protested the non-payment of compensations by the Federal Government five years after acquisition.

The protesters in Asaba who were joined by other property owners from neighbouring Anambra State have issued a seven days ultimatum to the Federal Government to pay the owed compensation.

The protesters are calling on the federal government to utilise the recovered Abacha loot to offset their compensation, Nigeria Tribune Reports.

The protest led by Captain Samuel Akaraiwe (retd), Thomas Adeyemi Agbavobor, Dr. (Mrs) Grossdale Oveido, and Uche Onuorah, accused the Minister of Works, Babatunde Fashola of blocking them from being compensated by the Federal Government, as they urged President Muhammadu Buhari to wade into the matter.

The protesters were seen bearing placards of various inscriptions such as “Fashola tell Buhari the truth”, “Abacha loot must be used to compensate us”, “Compensation is our right”, “Diversion is not a solution to the problems”, Five years, have we committed any offence? Among others.

Additionally, a petition signed by the leaders of the protesters has been sent to  President Buhari.

The petition reads in part; “The said acquisition which was made in 2017 or thereabout stringently barred us from entering our properties anymore. We have since waited patiently for the payment of the compensation due to us to no avail.

“Recently, we started hearing about plans being made by the Federal Government to officially commission the bridge with a claim by the Minister of Works and Housing, that the project is 95 percent completed and that phase 2A Okwe-Okpanam is left with four kilometers not done due to flooding.

“We left the property and they demolished most of them in the course of construction, they brought compensation forms, we filled them and they took our bank details for the payment of compensation.

“The claim by Mr. Fashola is not true as the distance covered during the enumeration and verification of crops and structures is over 17.5 kilometres between Okwe to Okpanam in Delta State while 17. 30 kilometres of Phase 2B from Obosi to Enugu Highway in Anambra State.

“Some of the property owners are now widows who use their husbands’ gratuities to put up the structures.”

“The Federal Government carried out enumeration and valued our property, we went to the Ministry of Works and did all the necessary documentation, not knowing that Fashola has plans not to pay us our right. Now, our properties have been vandalised and acquired by the government without compensation.”

Group Captain Akaraiwe, who is also the Community Liaison Officer for Okwe, lamented the condition of farmers in the community whose land which also contained fish ponds was taken for over five years.