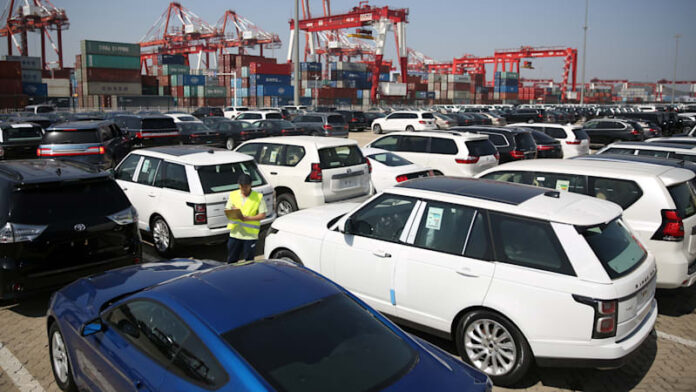 This did not settle well with clearing agents and other stakeholders and has led to further uproar.

The Service reviewed duties on vehicles weeks behind. The NCS reviewed duty on imported used cars from 35 percent to 20 percent, but also added 15 percent NAC levy,

National Publicity Secretary of Association of Registered Freight Forwarders of Nigeria (ARFFN), Taiwo Fatomilola, decried the new development, saying it is illegal and against established and legislated policies on tariffs.

“We woke up with news of NAC being removed and replaced with a levy this morning. They just switched over because NCS knows that NAC levy of 15 per cent, under the law, is supposed to be only two per cent for new vehicles, it is not applicable to used vehicles and used spare parts. The 15 per is illegal,” he said.

He alleged that the NCS is trying to strangulate Nigerians despite the harsh economic situation in the country inorder to meet Federal Government revenue targets.

He added that the introduced levy will encourage smuggling whilst crippling legitimate importers.

The President, National Council of Managing Director of Licensed Customs Agents (NCMDLCA), Lucky Amiwero, put forward his argument stating that the levy is pegged at five per cent according to the Finance Act of 2020 and 2021, and not 15 per cent as newly introduced by the Customs.

“What we have for levy according to the Finance Act is five per cent. Customs should tell us where they got the 15 per cent levy from, under what law? This 15 per cent, levy is illegal. There is nowhere the government has come out with 15 per cent levy on imported used cars. Is it a new policy or what? This is a ploy to defraud Nigerians,” he alleged.

Recall that CEM had reported that importers, clearing agents and car dealers had kicked against introduction of NAC levy on imported vehicles, calling it illegal and threatened to embark on industrial action.

Timi Bomodi, spokesperson of NCS, has said the new tariff was in line with adjustments stipulated in the Common External Tariff (CET) of the Economic Community of West African States (ECOWAS) protocol, of which Nigeria is a signatory.

According to Guardian the amended first schedule of Finance Act 2020, provided a reduction in duties and levies on imported vehicles as contained in part VI of the act under Customs And Excise Tariff (Consolidation), section 38, sub-sections A to D.

The act also provided a reduction of levy on motor vehicles for transportation of persons (cars) with (HS Headings 8703) from 35 per cent to five per cent.