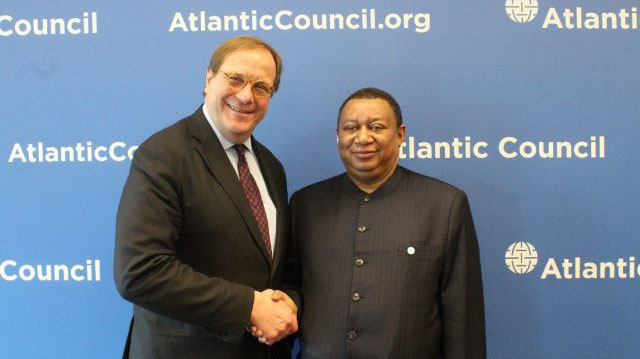 According to News Agency of Nigeria (NAN) citing an OPEC statement made available on Sunday, Barkindo received this honor during a dinner hosted as part of the Global Energy Forum by the Atlantic Council in Dubai, UAE.

According to the information on its page, the Atlantic Council is a nonpartisan organization that galvanizes US leadership and engagement in the world, in partnership with allies and partners, to shape solutions to global challenges.

The Atlantic Council promotes constructive leadership and engagement in international affairs based on the Atlantic Community’s central role in meeting global challenges. The Council provides an essential forum for navigating the dramatic economic and political changes defining the twenty-first century by informing and galvanizing its uniquely influential network of global leaders.

The Atlantic Council—through the papers it publishes, the ideas it generates, the future leaders it develops, and the communities it builds—shapes policy choices and strategies to create a more free, secure, and prosperous world.

NAN reported that Barkindo, in his acceptance speech, sees his service as Secretary-General of OPEC as an honour of a lifetime.

Barkindo emphasised that he has witnessed both challenging and historic moments over the last six years, which have underscored time and again the importance of cooperation and teamwork.

He however said that none of the achievements would have been possible without the tireless efforts of the OPEC Secretariat members of staff, highlighting their dedication and professionalism.

Barkindo will become a Distinguished Fellow of the Council after he completes his second successful term as OPEC Secretary-General on Aug. 1, 2022.