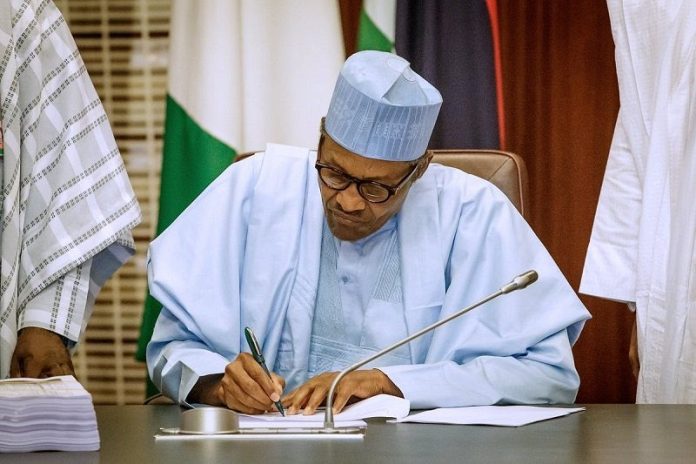 Buhari signs Finance Bill into law; here are the changes made

He made this known via his Twitter handle on Monday.

“I am pleased to announce that this morning I signed into law the Finance Bill, 2019,” he tweeted.

He said the Finance Bill would support the implementation of the 2020 Appropriation Bill.

He added, “This is the first time, since the return of democracy in 1999, that a Federal Budget is being accompanied by the passage of a Finance Bill specially designed to support its implementation, and to create a truly enabling environment for business and investment by the private sector.

“I thank the leadership and members of the Ninth National Assembly for the hard work and support that have gone into the passage of the landmark Deep Offshore and Inland Basin PSC Amendment Bill, and the Finance Bill; both vital to the successful implementation of the 2020 Budget.”

The bill is to set the tone for Nigeria’s fiscal policy for 2020, seeks to promote fiscal equity, align domestic laws with global best practices, and support Micro, Small and Medium-sized businesses.

Other major objectives of the Bill include increasing government revenues and stakeholder investments in investment/capital market through the introduction of incentives.

By signing this bill into law, it means that the following are now in full effect

MSMEs below N25 million in turnover per year are exempted from Vat registration.

Tax on dividend distribution (excess dividend tax): the application of this tax is now only to untaxed profits that are not exempt from tax

30% tax on paid interim dividends no longer apply on dividends that are not paid in money. It may also imply that WHT should be applied on bonus shares or dividend-in-specie.

The Bill is introducing VAT exemption on Group reorganisations, provided that the

CGT exemption is now introduced on Group reorganisations, provided that the

Commendably, far-reaching changes are made  to the tax laws covering seven different tax laws through the Finance Bill. Majority of the changes are expected to impacts positively on investments, ease of paying taxes especially for MSMEs and other sectors of the economy