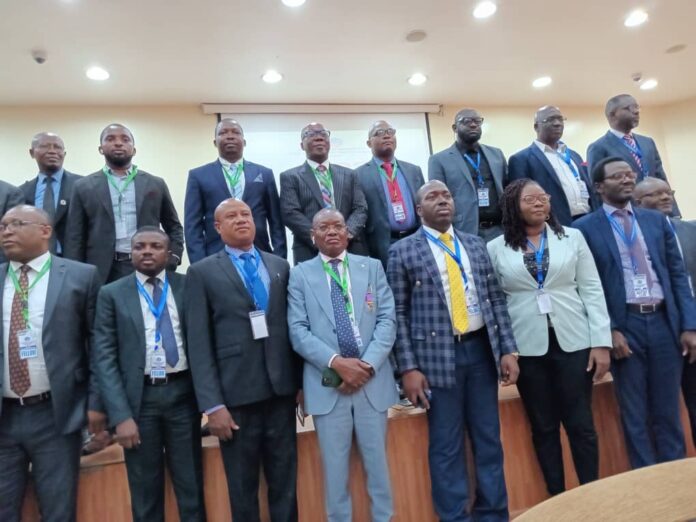 CEM REPORT, RISK | From all theoretical and empirical dimensions, the connection between politics and the economy have been established; political processes produce leaders that manage the economy. The current situation of Nigeria is a testament to the fact that good leadership is panacea for a thriving economy and vise versal. Therefore, it is an economic risk to embark on electoral processes that will produce wrong leaders. In fact, the biggest risk confronting the economy is politics.

It therefore becomes pertinent to put all measures in place to safeguard the various processes to ensure a credible election to produce credible leaders. This, in the current view, has continued to face attacks from the different actors that want to clinch to power at all cost and from those that are just out to truncate the process for personal or sectional reasons, posing serious risks to the entire process.

At the Annual Conference and Induction Ceremony of the Association of Enterprise Risk Management Professionals (AERMP) which held recently at the Bankers House, experts x-rayed the various risks in stages that confront the electoral process in Nigeria.

Mrs Taiwo Ige, FERP, FCIB, President and Chairman of Council of AERMP, in her welcome remarks, regarded the theme of the conference; “Managing Electoral Risks,” as most timely following the risks the entire process currently faces. Every discussant and speaker at the event alluded to the fact that following the spate of attacks on facilities of the Independent National Electoral Commission (INEC), risks abound in the 2023 general elections.

In the words of the Lagos State Resident Electoral Commissioner, Mr Olusegun Agbaje who was represented by Rukayat Aliu, “In an established democracy, anywhere in the world, elections are prone to different levels of risk in the pre-election period, election period and post-election period. Ability of the management body and electoral stakeholders to anticipate, identify, analyze and mitigate real and potential threats has direct impact on the credibility of the electoral outcome.

It is for this reason, among others that electoral risk management remain a major element in the processes of democratic consolidation”

Dr Blaise Ijebor, Director of Risk Department of the Central Bank of Nigeria, represented by Mr Paul Onogbodi highlighted external and Internal risks in our electoral process which include the risk legal and institutional framework poses on pre-election, election and post-election periods

In his presentation titled Managing Electoral Risks: A Roadmap to Strategic Governance and Development, Ijebor emphasized that every stage of the electoral process faces risk. Security is now the biggest of them all. Between 2019 and 2022, over ten attacks on INEC facilities has been recorded. Attack on INEC personnel, sensitive material and electoral officers have streamed the media over and over again.

There are risks surrounding logistics operation by INEC in so much as the logistics operation constitute a critical risk to the entire conduct of the elections. This obviously manifest in late arrival of material to polling units which often time delay commencement of election and sometimes lead to inconclusive process and or outright cancellation of result in such polling units.

While though INEC is an independent body as the name says, timeliness in release of budgeted funds constitute funding risk. There is a strong tie between release of funds and procurement of machines and other sensitive materials ahead of elections. However, it is commendable that funding has improved over time.

External factors that constitute serious risk to the credibility of Nigerian election results is the poor economic status of voters who simply are seeking daily survival. The level of poverty among these people creates a less value of their votes in their mind. To them, N5,000 is the much value that their ballot can command and selling it for that amount is enough gain for them in the entire election process and outcome. This is because, there are no changes year in, year out following outcome of elections. This is the cause of the selling and buying of voters’ choices called vote buying.

Low level of training and voters’ education further fuels the risk of vote selling and buying. Raising of awareness of the value of vote even in the face of economic hardship and struggle for survival is key in this regard.

‘’Poor training for electoral official, lack of training for political parties and the media, training for security personnel and lack of voters’ education are all challenges in building up awareness towards credible electoral process”; Ijebor said

Mr Olusegun Agbaje in his emphasis on INEC effort on election risk management re-echoed the critical attack on INEC and other electoral personnel as the major threat to election in Nigeria currently. It fell into all the INEC risk categorizations of critical, high, medium and low levels of risks.

In response to this threat and others, the electoral umpire has created some structures to help identity, analyze and treat possible risk factors/threats

Agbaje said; ‘’INEC has a five year strategic plan to track, monitor and shape the electoral process in Nigeria in response to the Commission’s critical challenges in the conduct of elections in tandem with the architecture of the election management system”

For quick response to security threats, INEC have adopted use of technology. INEC Security Alert and Notification System (INEC SANS), is an application developed by the Commission to facilitate fast alert and quick responses to threats within a maximum time of 30 mins. This works in collaboration with relevant stakeholder within and outside the Commission which include the Inter-agency consultative Committee on Election Security.

Introduction of the BVAS machine and direct transmission of election results are meant to effectively manage the risk of attack on voters, INEC men and election material during and after election especially result movement from one point to another.

Politics of violence by electorate on themselves came prominent in the goodwill message of the President and Chairman of Council of the Chartered Institute of Bankers of Nigeria, Dr Ken Okpara. He advised that political affiliation is a matter of choice and should be void of cohesion.

Olayinka Odutola, DG of AERMP charged all stakeholders to get involved managing the risk in our nation’s election.