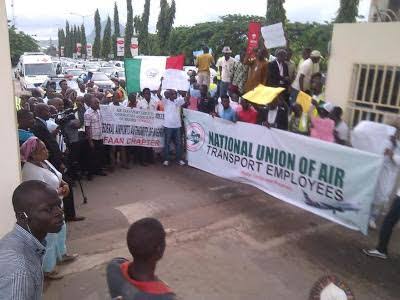 The aviation union agreed to end their protest after a meeting with relevant stakeholders.

“The strike that was embarked upon today against the Bi-Courtney Aviation Services Limited has been called off pursuant the acceptance by the company to recall the laid off members of our union and an undertaking to pay their salaries.”

Travellers were taken aback yesterday as several flights were cancelled at the Murtala Muhammed Airport Two (MMA2) in Lagos.

The cancellation was as a result of several aviation unions picketing the entire terminal belonging to Bi-Courtney Aviation Services Limited (BASL) over the sack of its members.

To press their dissatisfaction CEM learnt that members of the Air Transport Services Senior Staff Association of Nigeria (ATSSSAN) and other unions took positions at the critical entrances leading to the terminal building as early as 4 am barricading the entrance and exit with their cars and equipment.

The unions alleged that 37 workers including members of the union’s leadership were unjustifiably fired by the terminal management without recourse to Section 20 of the Labour Act on engagement and disengagement of workers.

The union had branded the dismissal of its members as witch-hunting and wilful intimidation, stating that rather than implementing the terms of service agreed upon with the union in 2021, the BASL administration had resorted to dismissing its members in its creation.

The union listed those affected by the disengagement to include ATSSSAN Branch Chairman, Secretary, Treasurer and Women Leader who were said to demand “the payment of terminal benefits to staff members who exited the service of the company lawfully in line with the signed Conditions of Service.”

According to the Deputy General Secretary of ATSSSAN, Comrade Frances Akinjole, the affected workers learned of their sack through “ordinary e-mails” sent to their different inboxes. This was after they were told to embark on a 10-day compulsory leave of absence.

Akinjole stated that most of those affected by the action dedicated at least a decade of their lives working for the company.

He declared that the union would not retreat until the affected staff were re-engaged or treated fairly by the BASL management.

Akinjole decried that the terminal operator had a penchant for disregarding labour laws, alluding to the 2018 sack of 29 of its members by the same management without due process as some of its intimidating actions against the workers.

All the airlines operating from the MMA2 terminal which included Max Air, Azman Air, Ibom Air, Arik Air, ValueJet, Green Africa and others were affected by the disruption to flight services.

Also, airline workers and other staff working from the terminal were unable to gain access to their various offices as a result of the action.

The picketing caused massive damage to the operations of BASL and the airlines operating from the terminal.

Also recall that in 2018, the unions picketed operations of MMA2 for two days after twenty-nine workers got sacked for wanting to join the unions.

We were not consulted on the redesign of notes – Minister...