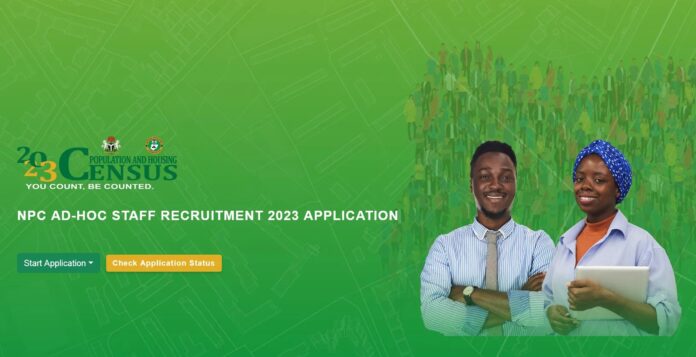 CEM REPORT, POPULATION | The National Population Commission (NPC) has officially unveiled its e-recruitment portal to recruit ad-hoc staff ahead of the 2023 population and housing census.

The portal which is expected to receive over 25 million applications will be the source of recruitment for ad-hoc staff for the exercise.

Unveiling the portal e-recruitment portal at the NPC headquarters in Abuja, the Executive Chairman of NPC, Nasir Isa-Kwara, said the bulk of personnel for the 2023 census will be drawn from the communities where they reside.

The platform which is expected to be open in a few months for application is a platform where Nigerians from all demography and gender can fill out the online form, get equal opportunities and register to be recruited with minimum bias.

In his address at the occasion, the NPC boss maintained that the recruitment process will reflect greatly on the quality of data to be collected and ultimately, the success of the 2023 census.

“This will remove the huge logistics of moving personnel across the country. Consequently, every community will have the opportunity of contributing to the census workforce thereby ensuring that the people are adequately counted.

“To us in the commission, the quality of staff that will perform the census activities is very important. Therefore, having good knowledge of the content of the census document, the technique and the organization of the census process is key to the success of the 2023 Population and Housing Census.

“The launch of the online e-recruitment portal for the 2023 census at the headquarters marks the beginning of the online recruitment process whereby Nigerians from all demography and gender can hook on to the website that will be provided by the commission to fill the online form and get themselves registered to be recruited.”

Addressing journalists at the event, the commissions’ census manager, Inuwa Jalingo, said the Commission is expected to receive over 25 million applications for the available jobs, adding that there was a need for the process to be competitive, reliable, and transparent.

“The adoption of the e-recruitment approach is to ensure widespread applications from all over the localities in the country, minimize bias and ascertain that all qualified Nigerians are given equal opportunity to apply and be recruited and ensure that no one is left behind.

“The Commission adopts an e-recruitment portal to recruit ad-hoc staff for the 2023 Population and Housing Census. This portal has been tested during pre-test and trial census and has been greatly improved to serve a different category of ad-hoc staff.”

On the basic requirements for the application, Jalingo maintained that the categories of staff to be recruited are “facilitators, training centre administrators, monitoring & evaluation officers, data quality managers, data quality assistants, supervisors, enumerators, and special workforce.”

He also noted that knowledge of the use of computers, tablets & smartphones is an added advantage.