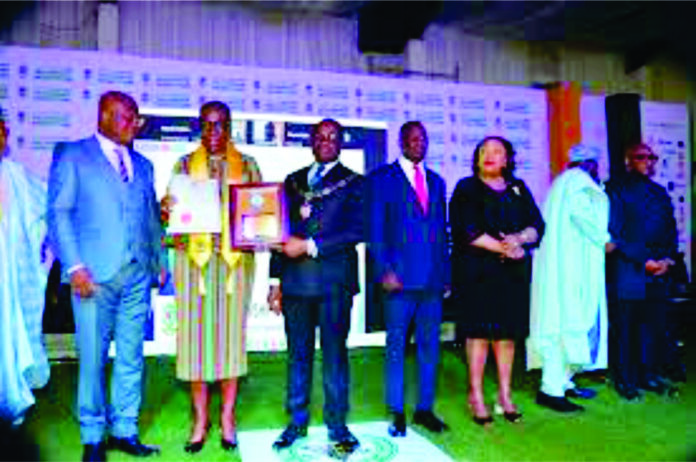 CEM REPORT, FINANCE | The President and Chairman of Council of the Chartered Institute of Bankers of Nigeria, (CIBN), Dr Ken Opara has charged the federal government to put in place a good financial model and a strong regulatory platform to enable private investment in infrastructure development.

Opara made this strong remark on Saturday at the 2022 CIBN Fellowship Investiture held at the Queens Park Event Center, Lagos

The investiture themed: “Bridging the Infrastructure Deficit: The Role of Financial Institutions”, was another opportunity for experts, the concerned and prospective investors to ruminate over the huge infrastructure deficit steering at the face of Nigeria, its consequent clog in the wheels of socio-economic development of Nigeria and possible ways of tackling the challenge.

In his opening statements, Opara dwelt on the timeliness and aptness of the theme since in the recent, there has been a recurring emphasis on the need for increased investment in infrastructure in the context of sustainable development, the clean energy transition, and the post-pandemic economic recovery.

He said; “The theme for this year’s event; Bridging the Infrastructure Deficit: The Role of Financial Institutions, is particularly apt as the need for increased investment in infrastructure has been widely emphasized in the context of sustainable development, the clean energy transition, and the post-pandemic economic recovery.”

In clear terms, bridging the infrastructure gap can never be achieved relying on Nigerian government budgetary allocation currently being stricken by dwindling oil revenue. It is therefore open that only through private investment can meaningful progress be made.

Opara therefore emphasized that having a good financial model and a strong regulatory platform in place is a good way to start, so that financial institutions can commit funds to Public Private Partnerships (PPP) to fund infrastructure development.

This is what he said

“Over the years, the public infrastructure deficit in Nigeria has become an issue of major concern. Generally, infrastructure is the foundation on which economic activities thrive. According to the Africa Infrastructure Country Diagnostic Report released in 2011 titled “Nigeria Infrastructure: A Continental Perspective”, about 40 per cent of the productivity are caused by infrastructure constraints. There is therefore no doubt that the dearth of key infrastructure in several sectors of the economy has continued to limit Nigeria’s growth potential and its competitive abilities globally.

“A McKinsey report details Nigeria’s infrastructure deficit and projects the need for an investment of about $32 billion year-on-year, through 10 years, for the country to bridge its huge infrastructure gaps. Also, the Minister of Finance, Budget, and National Planning, Hajiya Zainab Ahmed, said Nigeria will need around $2.3 trillion over the next 21 years to make up for its infrastructure deficiencies.

“Clearly, it is near impossible to expect the government to foot the entire bill. The approach adopted by the government in tackling infrastructure challenges over the years has largely been through a combination of budgetary allocation augmented by foreign and domestic debts. This approach partly accounts for the continued rise in Nigeria’s debt profile resulting in increased cost of debt servicing to the country. In this regard, there are serious concerns that project financing mainly through debt is not sustainable in the long run.

“The question then is with competing needs and dwindling resources, how can Nigeria create its industrial revolution? How can Nigeria fund the interstate road networks, railroads, electricity transmission lines, electricity distribution infrastructure, dams, sewage systems and other critical infrastructure, to spur job creation, a robust economy and improved standards of living for Nigerians.

“These are difficult conversations to have but they are necessary. However, the answer lies in adopting new thinking, attitude, aptitude, and approach towards unlocking the required funding for economically viable public infrastructure projects.

“A good place to start is for government to have a good financial model and a strong regulatory platform in place so that financial institutions can commit funds to Public Private Partnerships (PPP) to fund infrastructure development. Also, to create jobs and leapfrog growth and development, project lifecycles must be shortened, partners must be assured of their benefits without interference from successive governments, projects must be rid of conflict of interests, and minimum resistance from end users.

Germany, Denmark, and Others Join UK and US on Threat on Abuja, Transcorp Shutdown...