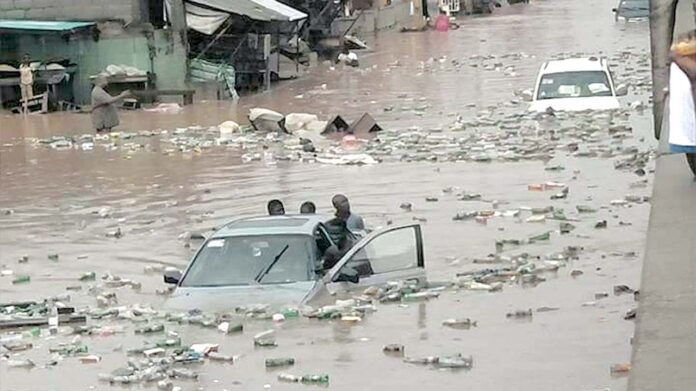 CEM REPORT, ENVIRONMENT | The recent flooding experience in several parts of the country may not yet be over as the Nigerian Meteorological Agency (NiMet) has called the attention of states in the north-central and south-eastern parts of the country towards more flooding.

This was as the Nigerian Hydrological Service Agency (NIHSA) revealed that the Ladgo dam in Cameroun would continue to spill till next month.

According to the Director General of NiMet, Mansur Bako Matazu while speaking with journalist at the ongoing Hydro-meteorological status and outlook system (HydroSOS) in Abuja, noted that flooding in some parts of the country was a result of 9f rainfall reaching its peak.

He further explained that while rainfall may have resulted in flooding the opening of dams and other water-holding facilities could still affect states in north central and the south-east.

“You remember, we issued the forecast in February and we followed up with the monthly updates that we are going to have above-normal rainfall in most parts of the country.

“So in terms of the rainfall-induced floods, we have seen the peak, but remember we told you that this rainwater gets collected into the reservoirs and dams, and whenever they are filled, it gets released.

“So on September 13, the Ladgo dam was released. Other dams were also released. So what we are witnessing now is riverine flooding. And from the information we are getting, we are going to see more floods.

“And now the rains are concentrating in the north-central and the southern states. So that will be a combination of short-duration, high-intensity rain, with riverine flooding.

“We are going to see more of these floods in the north-central states as we have seen in Kogi and also south eastern and south-western states as we are beginning to see in Anambra and some of parts of the south-west.”

Meanwhile, the federal government has collated the extant damage of floods to have claimed at least 500 persons and displaced 790,254  persons while 1,546 persons sustained injuries.

According to the Permanent Secretary, Federal Ministry of Humanitarian Affairs, Disaster Management and Social Development, Sani Gwarzo, while releasing the latest statistics after a meeting comprising all relevant agencies connected to tackling the menace in the country, a total of 45,249 houses have been totally destroyed while 70,566 hectares of farmlands have been damaged.

“In the area of the flood disaster outlook, records from the field have indicated that the 2022 flood is comparable only to the 2012 flood in terms of human displacement, livelihood disruption, infrastructure damage and environmental dislocation.

“The National Emergency Management Agency has confirmed that as of October 9, 2022, water levels at Lokoja and Makurdi along Rivers Niger and Benue is 11 per cent above the level recorded in 2012.

Gwarzo however told journalists that the government was working hard to address the situation explaining that there had also been a deployment of vital materials so as to save lives, adding that the positive outcomes from the field were being felt by those impacted.

He stated that as part of the federal government’s food intervention to cushion the effect of inflation and pre-harvest food shortage, President Muhammadu Buhari had approved the release of 12,000 metric tonnes of grains from the national strategic grains reserve silos overseen by the agriculture ministry.