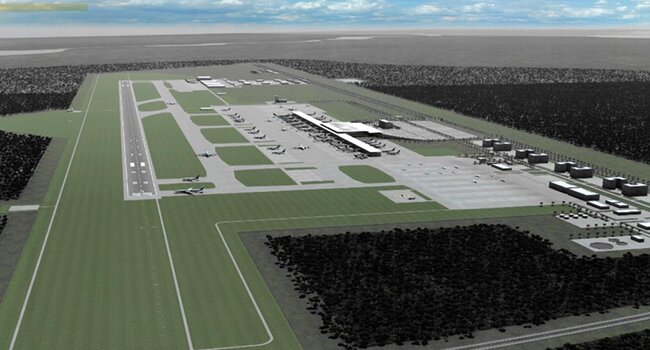 The Minister making the presentation at the 9th Ehingbeti Lagos Economic Summit, held at the Eko Hotel and Suites, Victoria Island noted that the airport would complement the existing Murtala Muhammed International Airport whose operation is overstretched.

He stated that approval on the airport project enjoyed accelerated approval, because of the growing need to further link Lagos and the southwest to international markets and regional trade.

The project, the Aviation minister said, would transform the GDP of Lagos and create jobs for the national economy.

”Lagos with its GDP, housing and Stock Exchange, 200 financial institutions, 25 million people on 5,377 square kilometres of land mass, including the Eko Atlantic, all the industries, the tradition, the history, the tourist attraction, the Eyo Festival, and so on and so forth, needs to be connected to the world.

”For Lagos to continue to be the centre of the economy of the activity of the country, Nigeria, the only best way you can link this city of Lagos to the world is obviously by infrastructure and especially civil aviation.

”The expansion of Lagos is astronomical, is huge, is big. This growth necessitated the need for another airport in Lagos. The idea and the size of the economy are good and big. So, you need to continue to link Lagos, not only with Nigeria but with Africa and the world.

”You are not going to get it wrong because aviation has the opportunity and uniqueness to link markets, link history, tradition and culture, people, schools and hospitals, which all Lagos has.”

Sirika also noted that the project will be closely monitored by its agencies to ensure compliance with standards.

“We will deploy our statutory agencies to ensure the project is done in compliance with international standards.”

Sanwo-Olu described the approval as another, “successful step forward” towards delivering his administration’s agenda of Greater Lagos and keeping the State on the path of irreversible economic prosperity.

“Granting the licence for the airport project is a right step in the right direction. For us, it is all about partnership for the greater good of our State. The real beneficiaries are the citizens and the businesses that will be using the infrastructure to activate more economic prosperity.

“We are bringing the government to tap business opportunities, while also providing platforms for businesses to flourish. That is how great economies are developed.

“The foundation of growth is building requisite infrastructure and creating platforms for businesses to thrive. This aviation infrastructure will reduce journey time and make commercial hubs in Lagos easily accessible. It would help investors to make the best local and international business decisions, given all the investments that have been brought to the Lekki Free Trade Zone.”

Also, Governor Sanwo-Olu said the project was all about a partnership between the federal government, through the Ministry of Aviation, and Lagos State for the benefit of the citizens and the businesses.

He said the state government was engaging in Business2Business as well as Government2Business to develop economies like Lagos State.

The governor said it was about giving them a platform where infrastructure and the opportunity for their businesses to thrive are available.

According to the Lagos State Government, the first phase of the project is estimated to cost $900 million.

It said that the master plan and aeronautical designs of the planned airport were in place adding that studies were ongoing about strategies, funding and other issues, after which the project would be taken to the market place.

The airport, according to the state government, is expected to cater to a minimum of five million people yearly and would be constructed in partnership with local and foreign investors.

Some private consortia have already expressed their interest in developing the airport, but the Lagos government is yet to decide on which investors to partner with on aviation infrastructure.