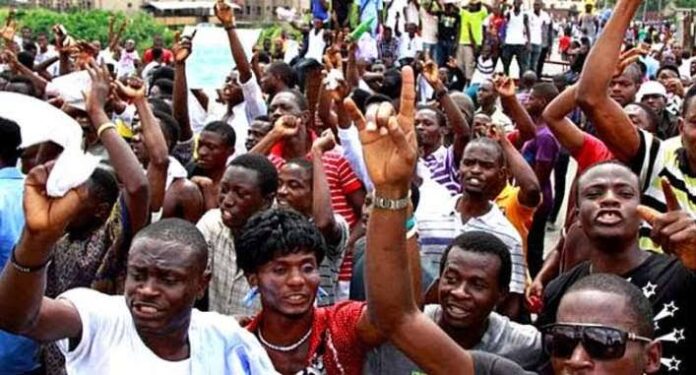 This is as a result of the protest presently ongoing on the road by students from various universities in the country.

The students under the aegis of the National Association of Nigerian Students (NANS) is protesting the federal government’s unwavering commitment to reach an agreement with the Academic Staff Union of Universities (ASUU) to end the seven-month-old strike.

The protesters who has vowed to remain on the road until the Nigerian government and the striking Academic Staff Union of Universities (ASUU) reach a middle ground and academic activities resume on their campuses defied the early morning rain in Lagos on Monday and assembled on the main road leading to the airport and just after the toll gates.

They barricaded the road and terminals obstructing those driving towards the airport with their cars.

Commuters were stranded and forced to trek long distances to access the airport as the siege took off as early as 7:00 am on Monday.

The protesters were seen carrying placards with various inscriptions such as; “No Work, No Pay is a Fascist Talk. Pay Our Lecturers” and “No Education, No Movement”.

Security presence has been reportedly seen at the scene wielded batons but maintained some distance from the protesters as they tried to ensure that the situation did not degenerate.

A similar protest took place by some members of NANS in the South-west region on Thursday along the Gbongan-Ibadan highway in Osun State, causing gridlock.

Similar protests had also held across major parts of the country some months ago until the students were seemingly fagged out and awaited the outcome of the negotiations between the striking unions and the government.

Meanwhile, the House of Representatives has scheduled to meet with the Academic Staff Union of Universities (ASUU) and other stakeholders to find a lasting solution to the lingering strike embarked upon by the union.

According to the statement the House was concerned there had been no agreement reached between the federal government and the striking university lecturers noting that the House was more worried about the negative consequences of the strike on the future and quality of education of the teeming youths.

“In the light of the foregoing, the House hereby request another opportunity to come together with stakeholders and leadership of ASUU to seek a amicable resolution.”