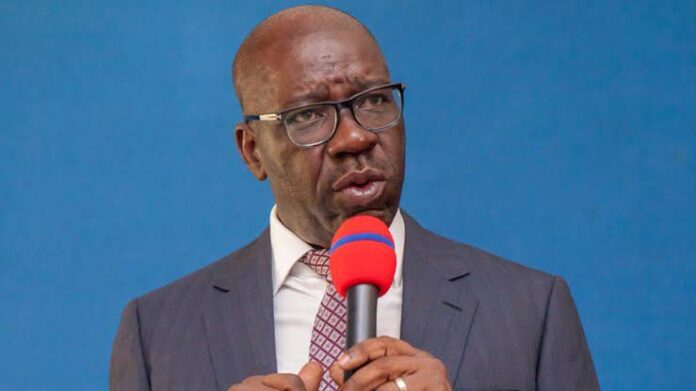 CEM REPORT, INFRASTRUCTURE | The Edo State Governor, Mr. Godwin Obaseki, has promised a sustained partnership between Edo State Government with the Federal Government to facilitate the reconstruction of the Benin/Auchi Road to end the sufferings of commuters and open up the area for more economic activities.

Obaseki said this while speaking with journalists in Benin City after a closed door meeting with the Otaru of Auchi Kingdom, Alhaji Aliru Momoh Ikelebe Ill, at the Government House.

According to the Governor, issues discussed at the meeting with the traditional ruler include modalities aimed at strengthening security in the region as well as the reconstruction of the roads linking Benin and Edo North.

“The Minister of Works has been very proactive on the issue as I received a letter from him requesting the Edo State Government to pay compensation for lands in some areas where they need to get their alignment through. We are going to be working on that for some few weeks to make sure that whatever they need to construct that road is provided for them.”

“As you know, if we don’t do something about the Benin/Auchi Road, then we will have a major security crisis in Edo State in years to come,” he added.

While commending the Governor for his developmental strides across the state, the Otaru of Auchi Kingdom appreciated the initiative revive the fertilizer factory in Auchi which he noted has become an employer of labour for the people of the state.

He said, “Obaseki came on board as Governor of Edo State, and the first thing he did in Auchi was to revive the fertilizer factory that was dead for so many years and he created jobs for the people. The fertilizer factory is still working till date and people are working shifts in the company and I am here to thank him for that.”

The monarch further noted, “I was part of a Committee in 1988 where we advised the government to revive the railway system as failure to do that will lead to the collapse of roads in Nigeria. That is where we are today.

“I appreciate President Muhammadu Buhari for re-introducing the railway system in Nigeria as it’s the cheapest means of transportation in any country. President Buhari has done well in the areas of rail transportation.”