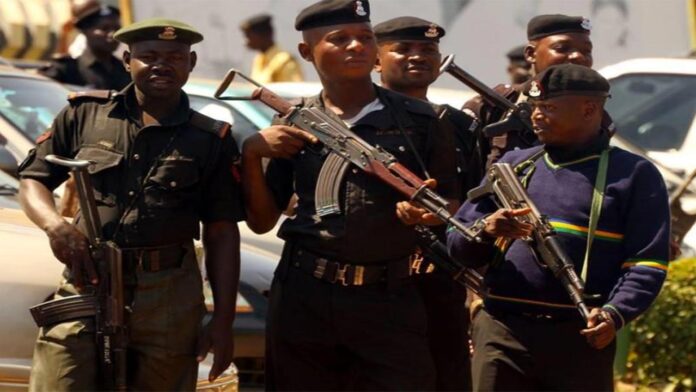 CEM REPORT | Three persons have been arrested for vandalising and stealing armoured cables in the Benin metropolis.

The arrest of the syndicate was made early hours of Monday by the Edo State Security Vigilante Network during a  stop and search exercise along Sapele Road in Benin City, Edo State.

According to Osasere Ekhator who led the operation, the arrest of three syndicates – Alli Mohammed, Mustapha Mohammed and Gilbert Okonkwo, will lead to the arrest of others.

He added that further investigation and interrogation revealed that one Okonkwo is an alleged dealer who procures vandalized cables from other members of the syndicate.

Ekhator on how the arrest went down explained that Alli Mohammed was arrested at 2:00 am on Monday, adding that the driver of the vehicle had put up a resistance but was overpowered by men of his team who discovered that the stolen goods were stashed in the trunk of the vehicle.

“Upon interrogation, Alli said this was the second time he has embarked on an operation,” Ekhator said,  adding, “he vandalised a transformer and electric cables at King Square and was carting the items to a dealer waiting to buy the items before he was apprehended by operatives of the Edo State Security Vigilante Network.”

On his part, the Coordinator, Edo State Security Vigilante Network, Col. Kole Oshoriamhe Omomia (Rtd) said officials of the security network are intensifying efforts to check the incidence of crimes across the state.

The Godwin Obaseki administration has prioritised security and has put in place laws to strengthen the fight against insecurity especially vandalising and cultism which is gaining ground in the state.

NSE Employees Support the Fight Against COVID-19 With Mask Donation

NGX Trading: Oil and Gas Index Closed 2022 as the Best-Performing