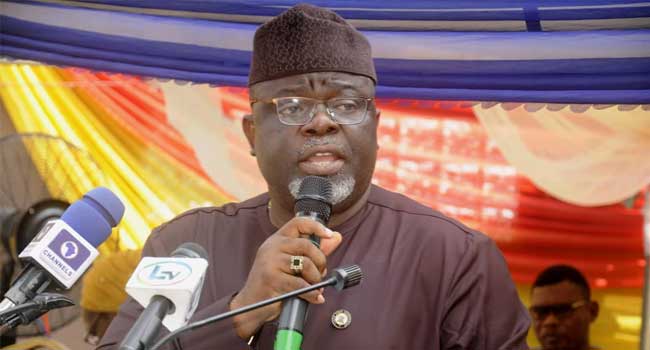 CEM REPORT | The Lagos State Commissioner for Physical Planning and Urban Development, Idris Salako, has resigned from his appointment.

His resignation comes barely 24 hours after the collapse of a 7-storey building in the Lekki area of the state, killing at least 5 people.

The resignation of the commissioner was confirmed in a statement issued on Monday by the Lagos State Commissioner for Information and Strategy, Gbenga Omotosho, who said that this is a prelude to the restructuring of the ministry and its agencies.

Although it was unclear if Salako resigned immediately after the collapse happened, Omotosho noted that the Lagos State Governor, Babajide Olusola Sanwo-Olu, accepted his resignation.

“The Governor of Lagos State, Babajide Olusola Sanwo-Olu, has accepted the resignation of the Commissioner for Physical Planning and Urban Development, Dr. Idris Salako. This is a prelude to the restructuring of the Ministry and its agencies.

‘’Governor Sanwo-Olu thanks the Commissioner for his services to the State and wishes him success in his future endeavours.

‘’The Governor warns all players in the sector to respect the law or face the consequences of any indiscretion, no matter who the perpetrators are.’’

Recall that a 7-storey building in the Lekki area of Lagos on Sunday morning collapse leaving 5 people dead.

The building which is reported to have caved in and collapsed is situated at Oba Idowu Oniru Street by Ave Maria Hospital, near Sandfield Bus Stop, Lekki.

The immediate cause of the collapse is still unknown.

The Lagos State Government have ordered the arrest of the developer and other building professionals working on the collapsed structure.

This adds to the continued building collapse experienced in Lagos State despite the efforts by the state government to curb the menace.

Lagos has experienced a series of building collapses, despite efforts by the state government to curb the menace.