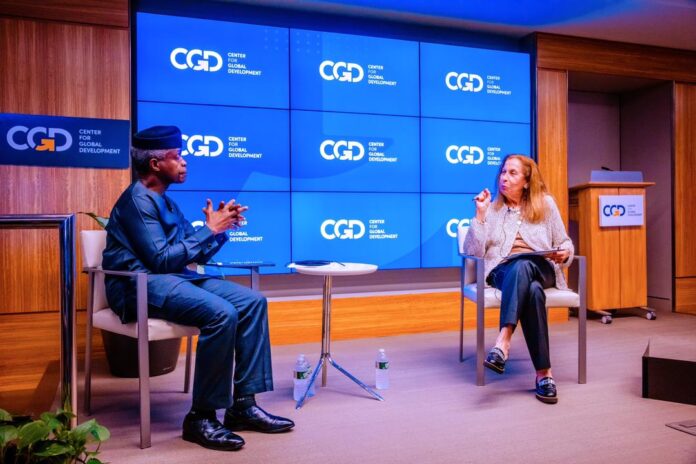 Explaining the swap deal which he named Debt-For-Climate (DFC), at the Center for Global Development in Washington D.C, the VP said that the concept is where bilateral or multilateral debt is forgiven by creditors in exchange for a commitment by the debtor on the grounds that the outstanding debt service payments will be redirected for national climate action programmes, adding that the commitment to it would increase the fiscal space for climate-related investments and reduce the debt burden for participating developing countries.

“Typically, the creditor country or institution agrees to forgive part of a debt, if the debtor country would pay the avoided debt service in a local currency into an escrow or any other transparent fund, and the funds must then be used for agreed climate projects in the debtor country.”

“For the creditor, the swap can be made to count as a component of their Nationally Determined Contributions (NDC).”

Furthermore, Osinbajo proposed greater participation of African countries in the Global Carbon Market while exploring financing options for the energy transition noting that there is a need to take a comprehensive approach in working jointly towards common goals, including the market and environmental opportunities presented by the financing of clean energy assets in growing energy markets.

“In addition to conventional capital flows from public and private sources, it is also essential that Africa can participate more fully in the global carbon finance market.

Addressing concerns of African countries and other developing countries regarding a just transition, he noted that:

“The central thinking for most developing countries is that we are confronted with this issue of a just transition with two, not one, existential crises – the climate crisis and extreme poverty.

“The clear implication of this reality is that our plans and commitments to carbon neutrality must include clear plans on energy access if we are to confront poverty. This includes access to energy for consumptive and productive use and spanning across electricity, heating, cooking and other end-use sectors.”

Osinbajo encouraged developed countries to support Africa to develop into a global supplier of carbon credits, ranging from bio-diversity to energy-based credits, which would be a leap forward in aligning carbon pricing and related policy around achieving a just transition.

Samantha Power, the Administrator of USAID said the idea was “fresh thinking that is very exciting”, she added that the U.S. was open to such new thinking even though it would require a full policy review of the American Government.

A statement by the Vice President’s, spokesman, Laolu Akande, on Sunday in Abuja reveals that the proposed Debt-for Climate swap agreement by the Federal Government will ensure Nigeria’s Energy Transition Plan will be effective in reducing Nigeria’s rising debt burden, and reap billions in debt relief.

At the public launch of the Nigeria Energy Transition Plan last month, Nigeria’s pathway to achieving net-zero emissions by 2060, and their leadership role in enabling a just and equitable climate future for Africa, with the ultimate objective of mobilizing the finance required to jumpstart implementation of the Plan was highlighted.

Nigeria’s commitment and ambition to achieving carbon neutrality while also ending energy poverty, which will lift 100 million people out of poverty, drive economic growth, and bring modern energy services to the entire population was spelt out.

However, Minister for Finance, Zainab Ahmed revealed that Nigeria’s Energy Transition plan requires spending $1.9 trillion, up to 2060, including $410 billion above Business as usual

The Minister also added that that plan requires $10 billion till 2060 to deliver additional funding for implementing the energy transition plan.