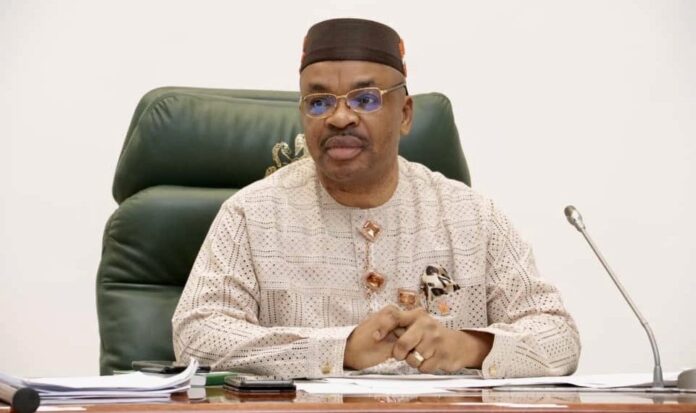 CEM REPORT | The Akwa Ibom state government has decried the position of the federal government towards investing in the state.

The government said despite sitting on about 36.1 percent of Nigeria’s oil and gas reserve, there is no single investment ranging from the upstream to the downstream sector to show for it.

Governor of the State Udom Emmanuel made the comment when he received a delegation from the Oil and Gas Free Zone Authority (OGFZA) led by its new Managing Director and Chief Executive Officer, Senator Tijjani Kaura, at the Government House, Uyo on Tuesday.

He called for concerted efforts by the federal government toward adequately harnessing the oil and gas endowments, and repositioning the oil and gas sector to Nigeria’s advantage noting that the state deserves to be given pride of place in the allotment of accrued benefits of the nation’s petroleum sector.

“Akwa Ibom State, despite sitting on about 36.1% of Nigeria’s oil and gas reserve, has no single investment by the federal government to show for it, ranging from the upstream to the downstream sector.

“If Nigeria does not make use of the oil and gas now that it is still very relevant to the whole world, in forty years the pursuit for the development of alternative sources of power would have been realized.”

He reassured his administration’s commitment to working with the new OGFZA administration while congratulating Senator Kaura on his recent appointment to succeed Umana Okon Umana who is currently the Minister of Niger Delta Affairs,

“I want to welcome you and say a big congratulation on this appointment. We’ll do everything to give you the maximum cooperation that you need.

“We’ve managed to bring in some companies ranging from LNG to Petrochemical. The ammonia and fertilizer plants will also make use of the gas. At the end of the day, we see that there’s hardly a situation where we can move Nigeria forward that we can ignore gas.

“Even the aluminium smelter company will not have to run on diesel; they’ll also need gas. It’s a web that will weave around and impact various aspects of the economy to make sure things work well.”

The governor recalled that his administration’s cardinal programmes were anchored on developing the three major gateways of air, land and water transportation, and noted that the state presently could boast of a dualized thoroughfare from the state capital to the Atlantic Ocean, with about 24km dualized bypass to the East-West road from, while planning a major coastal highway to the upcoming deep seaport.

“With proposals so far from some investors to do transhipment from the state’s imminent seaport; the Federal Government will be required to grant approvals for modular refineries to avail the industry with a hub for a ready supply of aviation fuel.

“For air transport, with the only MRO in this part of Africa to be ready for commissioning in about 8 weeks and a modern digital terminal building with full compliance to modern safety, security and ICT systems to guarantee ease of doing business within the year, a cargo section will naturally come into existence.”

Speaking earlier, OGFZA MD/CEO, Senator Tijjani Kaura, appreciated the governor’s effort and investment towards the actualization of the Liberty Free Zone in the State.

He described the project as a critical economic booster for the State which has the potential to attract over $22 billion and employ over 100,000 youths.

He appealed for a state-based agency to interface with the OGFZA in order to achieve the goals of the Free Zone, noting that: “the Liberty Oil and Gas Free Zone is strategically located, and on completion will be the largest in the country”

Nigeria to Run Economy on Gas