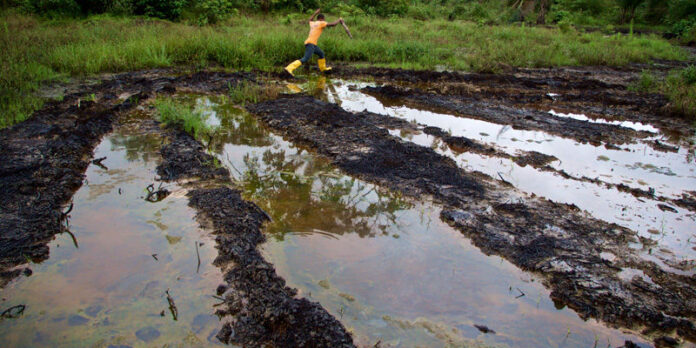 CEM REPORT | 1,086 oil spills were recorded in Bayelsa State from 2015 to February 2022 according to the National Oil Spill Detection and Response Agency (NOSDRA).

The Director-General, NOSDRA, Idris Musa, while receiving delegations from Connected Development (CODE) and OXFAM in his office on Wednesday in Abuja, noted that the federal government loses billions of naira as a result of the oil spillage experienced daily.

He added that 917 spills were a result of sabotage in the form of third-party breakage of pipelines with a hacksaw or outright blowing up of the pipelines.

“It is not about experts. If I came from a community for instance, and then an expert will come and aid me to break a pipeline in my community that will spill oil into my water, will I then drink it and do other domestic chores?

“We need to speak to these issues, we have done that consistently with evidence; what we call Disaster Risk Reduction programme for communities, telling them why they do not need to vandalise oil facilities.”

Musa added that communities in the area must protect oil installations and tackle such vandals, noting that their silence was causing harm to their environment.

“So CSOs also have to wake up and interface with these communities, let everybody check his own part and do the right thing, that is what I will advocate, the blame is not just on oil companies.

“If everybody in the statistics I gave, which is 84.4 per cent, stop that act, then we will have zero spills and our environment will be good.”

The Chief Executive Officer of CODE, Hamzat Lawal, said the organisation, through its Follow the Money initiative, tracks the utilisation of public funds to ensure its judicious utilisation in the interest of communities.

He stated that CODE in collaboration with Oxfam has been working in the Niger Delta region through its Conflict and Fragility project.

He explained that they were working on a new project and sought collaboration with NOSDRA, adding that the CODE partnership with OXFAM and the advocacy visit to NOSDRA was also to domesticate the National Action Plan on Business and Human Rights in Nigeria at federal and state

Ushie said the advocacy visit was to engage with NOSDRA on how to tackle challenges in extractive communities and how the communities can benefit more from the resources.

He added that the advocacy was to also get updates on how the agency leveraged the United Nations Climate Change Conference, COP26, and its plan to participate in and maximise the upcoming COP27 for the benefit of the nation.