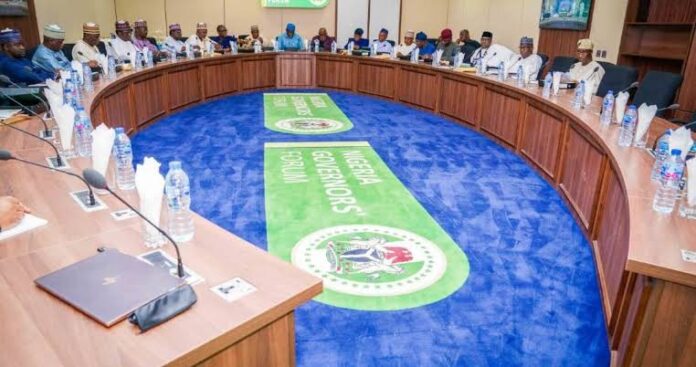 CEM REPORT | The Nigeria Governors Forum (NGF) has rejected the claim of the Paris Club refund consultant that it demanded and received the sum of $100 million to prosecute elections in some states.

The governors say the statement was blurring and obfuscating the real facts and legal issues in controversy by dishing out blatant lies and half-truths.

The governors in a statement by its director of media and public affairs, Abdulrazaque Bello-Barkindo, refuting that claim that the sum was  $68 million noted that Nwoko separated his claims from the other consultants.

“The NGF hereby states unequivocally that it has not at any time been involved in or been in receipt of $100m or any other funds from NED Nwoko to finance elections in any State.

“While Ned Nwoko strenuously tried to single out and justify his bogus claim of USD$68 million; the total amount which all the consultants working in concert, collectively seek and claim from the States and Local Governments, albeit unlawfully in USD$418,953,690.59 broken down as follows:

The forum adds that if Nwoko is sure of his claims, he should proceed to the necessary authorities to bring to justice any person or persons and all conspirators, including himself, who were allegedly involved in misappropriating public resources for campaign financing.

Furthermore, the governors add that the statement by the consultants confirms its position that the Attorney General of the Federation, AGF, Abubakar Malami, is on the side of the consultants.

“Perhaps, confirming our fears and that of the public that the AGF has abdicated his role as a public defender and trustee and become the strongest advocate to the consultants is now evident in Ned Nwoko’s press statement wherein he praised the role played by the AGF describing it as inevitable.

“This is also coming just on the heel of a similar press briefing by the AGF, a few days ago during which he stoutly defended all the consultants and berated the States for opposing or delaying the prompt payment of the sum claimed.

“As it is common with all unholy alliances, it does appear that the romance between the consultants and their determination to fight together under the AGF’s tacit coordination to pull out of the States the sum of USD$418,953,690.59 may have suffered a crack.”

The governors further stated that this must have led Ned to address the press alone and single out his unmerited claim of $68 million as justifiable.

Barkindo added: “It is instructive to note that all the claims by the consultants are rooted in Suit No FHC/ABJ/CS/130/13 BETWEEN: LINAS INTERNATIONAL LTD & 35 ORS VS FEDERAL GOVERNMENT OF NIGERIA & 3 ORS in which NED NWOKO instituted, and was awarded a bogus 20% of the sum of $3,188,078,505.96 from the States and Local Governments Paris Club refunds.

“The Judgment has been challenged on appeal by the States and NGF in Suit No CA/ABJ/PRE/ROEA/CV/327M1/2022: ATTORNEY GENERAL OF ABIA STATE & 35 ORS VS LINAS INTERNATIONAL LTD & 239 ORS.

“Neither is the period when Judgments were obtained of consequence in this case. Undoubtedly, the salient facts on the fraud associated with the Paris Club refunds can never be changed by a thousand Press Statements by the AGF or any of the Consultants.

“As the Judgments of the appellate courts, particularly that of the Supreme Court has begun to expose the creepiness and unlawful nature of the consultants’ claims; it is not surprising that they are now afflicted by dizzy spells, seriously discomforted, and are now driven by desperation to ensure that the plundering and fleecing of the State is quickly completed before the determination of the pending proceedings in the appellate and other courts in order to foist a situation of frustration and helplessness on the States.

“This is obvious as the consultants are not in a position to restore the funds to the States if they lose on appeal; as it is becoming apparent. It is therefore needless to join issues with NED NWOKO or indeed any of the consultants. However, it is imperative to debunk patent lies dished out to disabuse the minds of the undiscerning public.

Barkindo challenged the consultants to, first, have their day in court with the governors and after winning the case they can now demand payment, doing that “it is absurd to pursue payment in the face of all pending cases.”

He further noted that “The NGF and its leadership remain focused and determined to diligently pursue all appeals on the Judgments on the Paris Club refunds. All that it requests of the AGF and the consultants is to allow the appeal processes to run and be exhausted.

“It may be that the consultants will successfully defend the appeals after which they will be paid. However, if they lose as RIOK NIGERIA LTD has lost; which is the most likely verdict that shall befall all the other consultants; let the public funds in issue remain protected.

“We urge Ned and the other consultants to end the media war and direct all energies towards defending the appeals”.

Recall that CEM reported on a statement by Ned Nwoko