Home Economy FG Can’t Borrow to Meet ASUU Demand, University Not For Everyone —... 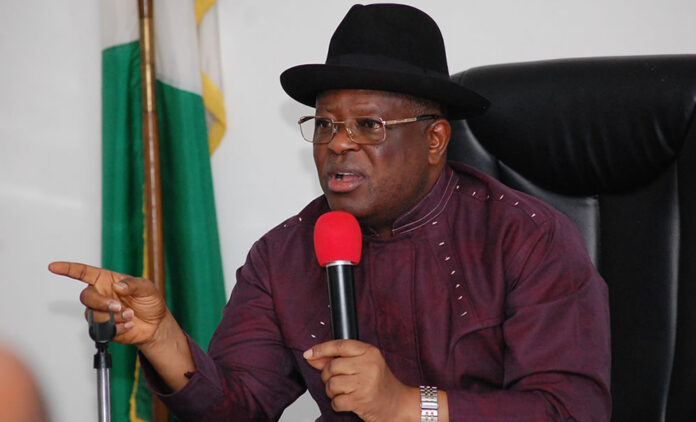 CEM REPORT | Governor of Ebonyi State David Umahi has said there cannot be any form of borrowing to resolve the issue between the Federal Government and the Academic Staff Union of University (ASUU).

He insisted that the basic problem in the country remains security, health and education.

The Governor made this statement when he received members of the Nigeria Police Trust Fund, led by Ben Akubueze.

Umahi stressed that no matter how genuine the demand of ASUU may be, the Federal Government cannot take a loan to the tune of N1.1 trillion to meet the union’s demand.

He added that a university education is not for everybody, noting that the basic education every country strives to attain is secondary and vocational school education.

He maintained that these are basic schools and qualifications obtained from them are enough to provide employment and sustainability for themselves.

“There is a need to review our educational system; it mustn’t be for everybody. I am not ashamed that I have a first degree and my deputy is a PhD holder; it doesn’t matter. So, I cannot see how we cannot sit down with ASUU leaders and iron out the strike problem.

“I have read on the social media and newspapers how students got into trouble just by sitting at home or engaged in other means of keeping themselves busy instead of being in school.

“There is no way the country will borrow N1.1 trillion to meet ASUU’s demand; it’s unreasonable. Are the demands genuine? Yes, but we can start little by little.

“There must be a commitment from both parties. ASUU members are not making demands to take to their houses so to say; they are asking for better infrastructure, as well as better lecturers and students. Yes, but we can start with a fraction of that and then have a programme that will run on the platform of sincerity to address all demands.

“Let me also say that most of the time, our people have a low appetite for maintenance of public works.

No matter how much you deploy to these universities, unless the users, the industry, the regulators begin to treat public infrastructure as their own, it will continue to go bad no matter how much Federal Government deploys to it.”

Recall that the Academic Staff Union of University (ASUU) went on strike on the 14th of February and has since extended the in August by another six weeks.

CEM has reported on the demand of ASUU.