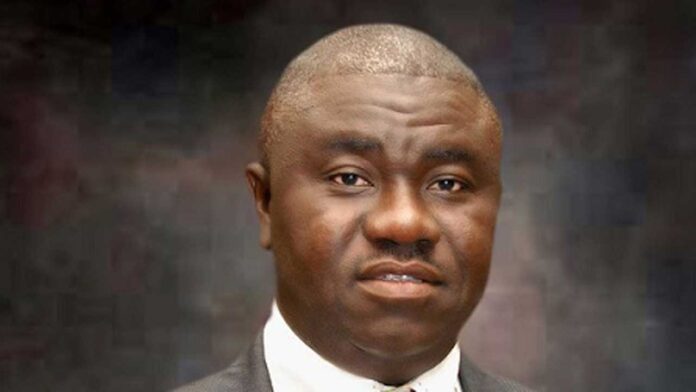 CEM REPORT | The honorable Minister for States for Budget and National Planning, Prince Clem Agba has strongly advocated mutual interdependence between individuals, communities and security agencies as an effective measure to effectively secure the Afenmailand in the face of the current insecurity in the country.

This is the message that dominated the Afemai born Minister’s speech delivered at the recently held convention of the Afenmai World Congress that was theme: partnership in securing Afenmai homeland: it takes a village.

Afenmai World Congress (AWC) is the global umbrella organization of all clubs, associations, unions and organizations consisting of all sons, daughters and friends of Afemai in the Diaspora as well as Afemai people in Nigeria. Afenmai is made up of six Local Governments in the Edo North. They are Etsako – West, Etsako-Central, Etsako-East, Owan-West, Owan-East and Akoko-Edo Local Governments.

In his speech at the 2022 convention, Agba considered the concept of partnership within the context of mutual dependency along the philosophical portrayal of the name, Afemai, which translate to ‘our homeland’ bolstered by spirit of ‘akugbe, okugbe’, meaning unity and symbolizing security and safety. Therefore, mutual dependency should be between individuals, communities on one side and security agencies on the other side.

He said; “Philosophically, the homeland (Afenmai) is symbolic of security and safety. Permit me therefore to consider the concept of partnership, in the context of mutual dependency. Mutual dependency is one amongst individuals, between communities in the afenmai spirit of ‘akugbe, okugbe’; and with security agencies as on the other side; security is everybody’s need and business.

“Designing our security architecture in the context of these concepts, remains an effective mechanism for developing a stronger sense of communal cohesion, reducing crime and avoiding mutual fears and apprehension.

According to him, security, being pivotal part of social infrastructure as well, requires cooperation among the 3-tier stakeholders as the three need themselves to perform effectively. None of the three; individuals, community and security agencies can handle security alone.

“Security is crucial to the community and constitutes one of the indispensable social services facilitated through mutual inter-dependence of individuals, the communities and security agencies or institutions.  In other words, it requires the cooperation and mutual support of the 3-tier stakeholders, with individuals and communities on one path and the government/institutions on the other.

“Neither the people, the communities nor the government or security agencies can handle matters of security alone. Just as individual community members, security agents also own lives that deserve to be protected. In fact, an insecure or unsecured security operative constitutes security threat.

“The provision of security therefore, demands the creation of a conducive social environment for security agents like the police. Thus, the police cannot ensure security or tackle crime alone, as it requires partnering with the community”, Agba said.

The Minister further illuminated the place of social and physical infrastructural development of the communities as a measure to improve security as it evokes communal love and inspires a sense of ownership among the people, which in turn enhances security.

He said: “Community development facilities improve conditions of life as they reduce unemployment; in both rural and urban areas, as well as eradicating poverty and disease. Availability of these social and physical infrastructures evokes communal love and inspires a sense of ownership among the people, which in turn enhances security.”

In the line with the required partnership and cooperation among the 3-tier stakeholders, Clem Agba recommended the following;

Earlier in the speech, the Minister did not fail to tell the world the true nature of the Afemai people and environment.

He said; “Permit me therefore to start this discourse with the philosophical concept of Afenmai, which is an expression that defines who we are or what we were conceived to be. That is, “a people with affectionate affinity to their homeland. Afenmai means, our homeland. It is a term that evokes a sense of community, affinity and bonding.

“Afemai is a generic term that evokes an instant sense of oneness despite the several distinct, but artificial political divisions and sundry linguistics dialects that constitutes it. Besides her history and cultural riches, Afenmailand is an endowed geophysical landscape, with varying weather conditions, rich agricultural lands and diverse natural and mineral resources.

“Afenmailand is an Eldorado; a desirable place to be and to belong. It is sought after; a treasure. I am proud to belong.”

The Minister listed “the Afenmai World Congress (AWC) as most suitably positioned to ensure the implementation of the above suggestions, so as to evolve a common standard across Afenmailand, in the true communal spirit of ‘Afenmai’ (our homeland).

Like every other community across the country where criminal elements perpetuate their activities, the Afemai region of Edo State has had its fair share of the disturbance of economic activities. Being an agrarian region of the State, farming activities are seriously hampered as kidnapping and ransom payment has squeezed a lot of resources from the people.