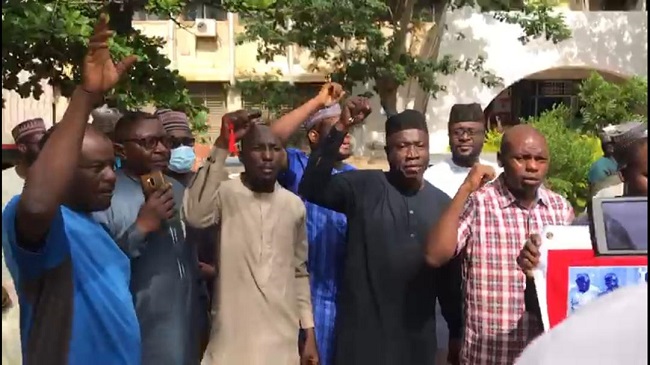 CEM REPORT | A video released by the Abuja-Kaduna train attackers has revealed that the terrorist intends to kidnap President Muhammadu Buhari and the Kaduna State Governor, Nasir El-Rufai.

The March 28 terrorists also threatened to sell and kill the remaining captives if their demands are not met.

“This is our message to the government of Nigeria and just as you have seen these people here, by God’s grace, you will see your leaders; your senators and governors will come before us.

“These ones you are seeing here, we will keep some as our slaves and sell them off just as our Imam told you in the past.

“Just like the Chibok girls that were sold off, we will equally sell these ones as slaves. If you don’t adhere to our demands, we will kill the ones we need to kill and sell the remaining.

“By God’s grace, el-Rufai, Buhari, we will bring them here,” one of the terrorists said in the video.

The terrorists while flogging the remaining captives severely as they cry and wail in pain added that the committee set up to negotiate release was doing nothing but “drinking tea.”

”you should understand, look properly it’s not our intention to, but it’s the outcome of what the Nigerian government is doing, setting a committee, a tea party in Kaduna to deliberate on how to rescue these people. They are there, enjoying the tea.

“You should know that there is nothing that the committee can do. They can’t do anything. Are you not relying on guns? Your aircraft and your guns are like spiders web to Allah. We are for Allah, we are doing it for Allah. We are not afraid of anybody.

“You should know that this is a little that you’ve seen. Know that, if our demands are not met, this place will become an abattoir,” he said

Following the release of the video frustrated families of the kidnapped besieged the headquarters of the Federal Ministry of Transportation, the Ministry supervising the Nigerian Railway Corporation (NRC), preventing staff of the ministry from accessing their offices on Monday.

The protesters, who wielded placards, demanded the release of their relatives

CEM gathered that the beating of victims by terrorists was triggered by anger over the blockade of a ransom in exchange for some of the captives.

A victim in the release video identified as Mukhtar Shuaibu confirmed the terrorists’ displeasure over the blockade of the ransom.

Further reports suggest that the terrorists had begun negotiating directly with relatives and had agreed to release some of the captives, especially one of them who is said to be ill.

Moreover, soldiers had warned that payment of ransom was illegal and threatened to arrest them. This is what is believed to be the cause of the video.

The protesters stood their ground despite several appeals from different officials of the NRC until the Minister, Muazu Jaji Sambo arrived at the Ministry Headquarters to personally interface with them.

The minister appealed to the families to give him time to settle down in office and take briefings from the relevant quarters.

“I can assure you that we will stop at nothing until the last person is released. I have not received any briefing, so how can I give you a time frame with which this issue will be over? When I get the briefing, I should be able to tell you ‘give me so-so time.’ I am pleading with you to give me a chance. I have to go and contact the security agencies,” he pleaded.

Speaking on behalf of the entire families, Imran Ahmed told the Minister that they intended to completely ground activities in the Ministry.

However, he added that the Minister’s intervention and assurances had eased them to give him a chance, saying, “we came to sit here until our family members are released. After due consultation, we have decided to give you some breathing space. I hope and believe that we won’t have cause to come here again,” he said.