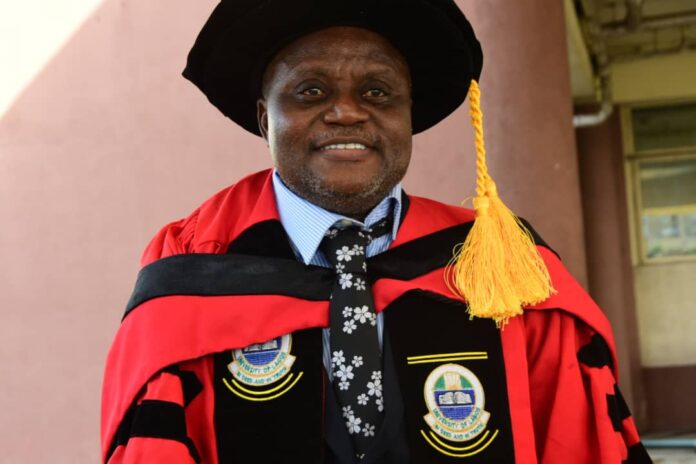 CEM REPORT | A Lagos State University Don, Professor Olatunde Lawal Owolabi has called on the Nigerian University Commission and other relevant authorities to incorporate entrepreneurship into physics education curriculum to foster the contribution of the subject into the national economic development through acquisition of skills needed to increase quality of graduates and employability.

Professor Olatunde Lawal Owolabi, the Sitting Dean of Faculty of Education and of the Department of Science and Technology Education, at the Lagos State University (LASU) Ojo, Lagos, made this emphatic call as he delivered the 84th Inaugural Lecture of the University on Tuesday, 19th July 2022 at the Buba Marwa Hall, LASU Campus.

Inaugural lecture is always delivered by a full-fledged professor who has done an extensive investigation into a subject. It also connote inauguration of one’s chair in the Senate

According to Professor Olanrewaju Abodunrin of the department of Educational Foundation and Counselling, Inaugural Lecture is about launching oneself into world of research. It is an expression of your research focus, your contribution into the world of academics and announcing to the world what you will be committed to afterwards

He explained further that the reason institutions fail is lack of planning and planning requires research. The essence of research is to investigate thoroughly, finding out what it should have been, what others have found, what it is, what challenges there are and proffering solutions as a scientist mainly. This is to help to minimize errors in human endeavors.

In the inaugural lecture titled, Abstracticism And Realism Paradox: The Nonsensical Debate In Physics Classroom, Professor Olatunde Lawal Owolabi chronicled his experience in his early contact with physics, his contributions to the study of physics and strong recommendations that are critical to debunking the perceived difficulty in the study of the subject

Prof. Owolabi lamented the embarrassing seeking for jobs by physics Graduates who should be equipped with sufficient skills in the repair or maintenance of electronics such as radio, television, phones, and computers to become self-employed and self-reliant.

Beyond acquiring technical skills, the conundrum of infrastructural setback that Nigeria currently face can be traced to the educational relegation that have prevailed in the subsequent administration over the years. This, the Professor said can be arrested by simply paying governmental attention to education, science and physics in particular to create a bedrock for technological development of the country and produce qualified manpower.

Following his experience in his early days of studying physics in secondary school, years as a scholar in the subject and involvement in university, national and global consultancy, Prof. Owolabi gave abysmal rating to the methods currently applied in the teaching of the subject.

As a matter of fact he faulted the first statement in the study of physics which is its definition. Being defined as “the study of matter in relation to energy”, doesn’t make any sense. A more crippling part of the study of the subject is the lack of lab equipment which should aid ‘learning by observation’ against the current situation of ‘learning by memorization’.

“With a paradym shift in the teaching method and imparting of Physics Education, better scholars and teachers of the subject would be produced and eventually become employers of labour, thereby making the economy more robust”; Prof. Owolabi insisted.

A very remarkable part of his numerous contributions to the study of physics is his focus on the young ones down to kindergarten and nursery level of education through the language the young minds can understand. Professor Owolabi composed poems and rhymes that instill nature and scientific inventions in children to open their minds to the subject of physics. Below is one of them;

Prof. Owolabi made some far reaching recommendation to advance the study of Physics in Nigerian schools. These include

At a side interview, Prof Owolabi expressed delight over the delivered inaugural lecture having been able to show to the world his contribution to the world of academics and the teaching of physics.

Professor Abodunrin who was present at the Lecture describe Prof. Owolabi as “a researcher per excellence. He has contributed immensely in the area of Physics Education. He is a world known figure who has published in numerous international journals. He has allowed his works to reflect in the activates he is involved in and he has been a guide to upcoming researchers”

For every accomplished man, there is a woman. Mrs Oluremi Owolabi, wife of Prof. Owolabi was overwhelmed with joy to see her husband accomplish another stride in his career with strong support for him while he went through the numerous researches. Some of the sacrifices include having to cope with paucity of funds sometimes due to financial commitment to research process by the professor.

For Oluremi, “it is the Lord’s doing and it is marvelous in her eyes”

The Journey of Self Reliance: How Prepared is Africa? (2)