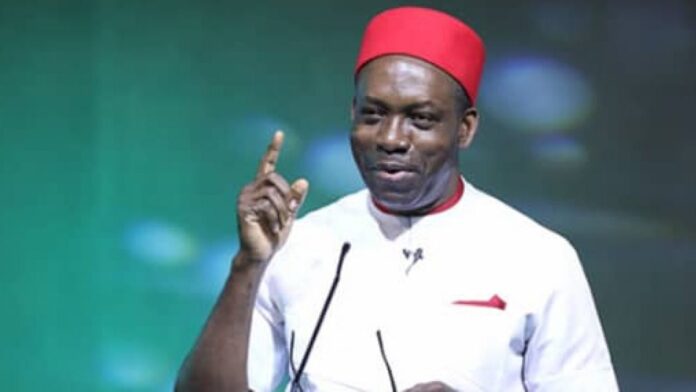 CEM gathered that according to the new tax regime introduced by Governor Charles Soludo which sums to N14,200.00 to be paid by shop owners and a random N200 daily tax is also forced on hawkers.

The governor has earlier hinted in a meeting with Parks and Market executives in Awka, that he would introduce a new tax regime in the State.

He explained that the new tax regime was necessary as the NNPC had not remitted money into the federation account since February, adding that money accruable from the sale of crude oil was gradually dwindling.

Trader in the market said they were informed of the new taxes by the market manager Thursday, last week.

According to the traders the announcement said they were expected to pay the levy of N14,2000 as stallage rent and others fees between Tuesday and Friday of the preceding week.

While speaking to journalists in Awka, former chairman of Eke Awka Market, Emeka Onyemaechi, revealed that the state government had earlier banned all cash payments of revenue from July 1.

“Last week Thursday I was inside my shop when some people, claiming to be government revenue officials announced that we should pay N14,200 for our stallage and other fees from Tuesday.

“On Friday, I went to the Anambra State Board of Internal Revenue to find out the true position and the information I got was that on Tuesday, they would be coming to capture all shops in the market, and everybody will pay N2,000 for the capturing and after that government will give the account details where traders will pay their fees.

“Unfortunately, on Tuesday that was a holiday, they started the capturing and collection of the N14,200. They forced people to the market, where over 20 POS terminals were stationed and people without cash were asked to use their ATMs to pay. After that I called the revenue office again and complained, they said we should pay.”

He appealed to the  state government to address the issue of hiring private persons to collect revenue for it.

He added that despite all the taxes and levies, some people are still extorting money from the hawkers, adding that whoever argues with them would be beaten to a stupor.

An elderly woman, Nkiru Obiora, who hawks vegetable in the market, said that it was tough for them coming to the market and pay multiple taxes.

According to her, she pays up to N600 any day she brought vegetable into the market, adding, “If you argue with the collectors, they will beat you without minding your age.”

Although, the Chief Press Secretary to the governor, Mr. Christian Aburime, said government would issue a statement on the issue at the appropriate time.

Meanwhile an anonymous source from the Anambra State  Board of Internal Revenue, has confirmed that the state government has approved N14,200 for payment in eke Awka market.

Below is the breakdown of the Eke Awka market fee.