Home Top Global News Boris Johnson resigns: Why and Who will Succeed Him? 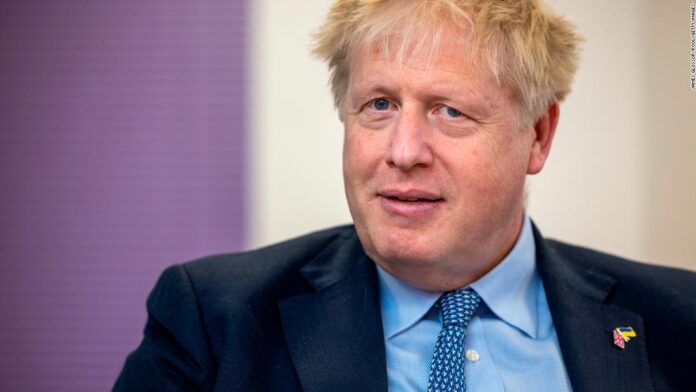 CEM REPORT | The Prime Minister of the United Kingdom, Boris Jonson announced his resignation his position Thursday following array of allegation and misconduct that have stirred political crisis in UK government in the last months.

In his speech, Boris Johnson said it is “painful not to be able to see through so many projects and ideas” as he announced his resignation as Tory party leader. He said he had tried to persuade colleagues it would be “eccentric” to change leader and blamed the “herd instinct” in Westminster for his exit. He added he intended to stay in office until his successor is chosen.

With the resignation, Boris Johnson brought to an end his less than three years leadership after leading his party to win a huge majority in the 2019 general election.

While this resignation is sudden, it is however not surprising especially with the recent developments which included the resignation of two members of his government. Some of those accusations and illegalities that are perceived to have led to his resignation include lack of focus and ideas in his cabinet coming from a former adviser Dominic Cummings.

A party member Jeremy Hunt, who is also a Member of Parliament has also accused Johnson of lacking “integrity, competence, and vision”, raising serious questions about his philosophy or lack of it.

The handling of the then-Conservative MP Owen Paterson’s suspension recommendation by the Johnson led House of Commons committee is also part of the integrity perception of the outgoing Prime Minster. The Conservatives, voted to pause a 30-day suspension recommended for Owen for breaking House lobbying rules in an attempt to benefit companies who paid him. They voted for a new committee to be set up to look into how the investigations against Paterson were carried out.

Though Owen Paterson, however, resigned after an outcry, Johnson later admitted that he had “crashed the car” in his handling of the case

Increment of Tax in the facing of escalating inflation that is currently at 9.1% became a big issue as well. It was considered inappropriate after the government took step to cut fuel duty to stem the tide. Although the government said the tax rise would pay for health and social care, anyone earning more than £34,000 a year will still pay more.

“In the middle of the worst cost of living crisis for decades, the government chooses to increase taxes on working people,” Labour Party leader Sir Keir Starmer was quoted as saying in April.

Johnson was also fined for breaking lockdown rules after he attended a gathering on his birthday in June 2020. He also apologised for going to a “bring your own booze” party in the Downing Street garden during the first lockdown.

In December last year, Johnson told the Commons that “all guidance was followed completely in No 10”, but is now under investigation by a Commons committee over whether he knowingly misled Parliament.

The position of Chris Pincher as Conservative Deputy Chief Whip earned Johnson incompetence accusation. Pincher was said to have gone to a private members’ club in London on Wednesday, June 29 and “drank far too much” and “embarrassed himself”. He was accused of groping two men, which led to a flurry of allegations, some dating back years.

How will a successor to Johnson emerge?

With the resignation, the process leading to electing a success is triggered according to a post by BBC. Under the current rules, candidates need the support of eight Conservative MPs to stand. Once all the candidates have declared – if there are more than two candidates – Tory MPs will hold a series of votes until only two remain.

When two MPs are left, all Conservative Party members around the country – so not just MPs – will vote for the winner. The timescale for each contest is decided by the 1922 Committee of backbench MPs, and the committee could vote to change the rules before the contest takes place.

Whoever wins the contest to lead the Conservatives, will become the leader of the party with the largest number of MPs in Parliament. The Queen will therefore ask them to form a government. Yt is notable that when a prime minister resigns, there is not automatically a general election.

Mr Johnson intends to continue as prime minister until a new leader is in place. That means he would stay in office until the Conservatives choose a new leader, as his predecessors Theresa May and David Cameron did when they resigned.

However, Some of Johnson’s critics are calling on Mr Johnson to leave No 10 immediately rather than waiting for a successor to be chosen. Labour leader Sir Keir Starmer says if Mr Johnson is not removed at once, he would call a vote of no confidence.

Under a motion of no confidence, all MPs – not just Conservatives – would get to vote. One more MP voting in favour than voting against would be required for it to pass. Such an outcome, however, would rely on Conservative MPs voting against their own government – which could be unlikely.