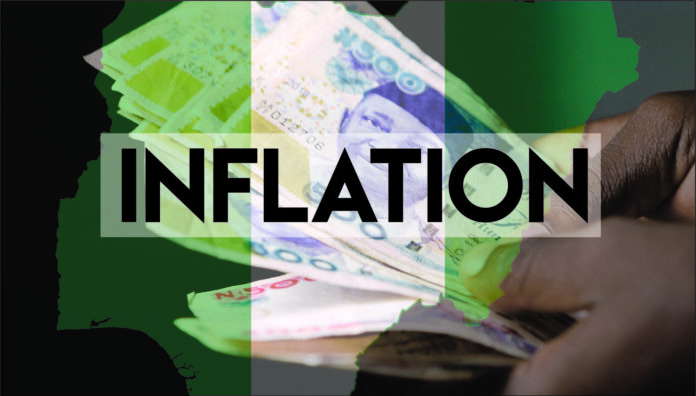 CEM ANALYSIS | Nigerian inflation has been on the upward trajectory for 11 consecutive months until it hits its two digits highest of 17.71% in May according to the report released in June by the Nigerian Bureau of Statistics and published by Continental Economy Magazine.

Analysts have said this trend will continue regardless of the recent hike in Monetary Policy Rate (interest rate) by the Central Bank of Nigeria aimed at moderating the upward shoot.

Continental Economy Magazine released an analysis on the possible impact of the hike in MPR on the rising inflation in which it was projected that the possibility of the new MPR to narrow the inflation trend is very slim. The reason was hinged on the fact that inflation that we are witnessing is cost push against the demand pull that interest rate can tame.

In this line, CEM Analysts are of the opinion that inflation will continue to rise at least in the short term following glaring factors, both local and international, that interest rate is incapable to subdue. Some of the factors highlighted include cost of food which has continued to rise, global energy crunch also impacting food prices and weakening naira pushing up cost of importation.

From the Chief Analyst, Dr Alex Anameje, he said; “What the country is witnessing is obvious cost-push inflationary pressure which requires good supply management strategy to tackle. Considering the trends over the years, prices of food items rise at this period of the year and because food takes over 60% of the aggregate weights of items in the inflation basket of the country, any rise in the cost of food will affect the inflation rate adversely. “

According to the last selected food prices report released by NBS, food prices have increase averagely by more than 30% y-on-y with some going above 40%. This trend is expected to continue at least in the near term according to Alex Anameje.

Impact of food prices on the overall inflation is a factor that echoed across the discussion by the Analysts though attributed to the different known causes which are impact of the Russia – Ukraine war on energy and then on food.

“From a global economic perspective (since Nigeria is not an economy in isolation), the goings on around the world especially as it concerns the war between Russia and Ukraine (two countries that contributes a great deal of the world supply of energy and food respectively) is a clear reason that inflation will keep rising for as long as the war remains except if other countries are able to fill up the supply gap of commodities sourced from Russia and Ukraine.

“On the Nigerian Scene, the effects of the rise in the global level of inflation (as evident in the short fall of energy and food supply) has resulted in a rise in food prices as well as energy prices. To a great degree, Nigeria’s economy is influenced by the prices of oil as well as consumption of foreign (imported) goods, thus any increase in oil prices and imported commodities has a ripple effect on the upward price of other commodities and services.”

Importation also remain central from the position of Senior Consultant at PearGrade Consult Limited, Gabriel Imomoh with regard to rising food prices and the overall rising inflation.

He said; “Nigeria is an import dependent nation and the bulk of our industrial inputs and finished goods are brought from other countries and within this period under review, there has been a lot of pressure on exchange rate with its attendant cost push into domestic production. This will bear on prices pushing the figures up.”

Food and local industrial production is further found to be hampered by factors such as acute infrastructure deficit and escalating insecurity that tends to be directly targeted at farming activities. The recent expansion of the tax net to products like carbonated drinks is expected to further impact on prices.

“The inadequate level of infrastructure in the country and the introduction of new tax on carbonated drinks (a move by the Federal government to generate additional revenue) as well as the security challenge in some part of the country which hitherto contribute enormously to the supply of food will also drive inflation higher”; Ogaga said.

Imomoh corroborate Ogaga saying; “We are still faced with the issue of insecurity running across food producing zones within the country depriving farmers from their farm activities. This has been seen impacting on the food prices which has continued to be on the rise. Even with the fairly favourable raining season, farmer’s production in the up n

orth is still hampered as farmers are scared of bandits, kidnerpers, boko haram even now spreading to the southern part.”

“Furthermore, with the 2023 National elections drawing near, the economy as is usually the case during electioneering seasons will witness an increase in the amount of money in circulation. This will further result in an increase in the general price level”; Ogaga added.

Following the above, the government need as a matter of urgency to begin to implement short and long term measures to create path to food availability while tackling insecurity headlong with every intelligence and combat.

Infrastructural priority based on direct effect on production is key to impact creation against the general approach. Topping this priority list is electricity following its direct link to production and storage of food.

In this regard, Ogaga said; “Since inflation is an ‘unavoidable enemy’ which must be effectively and efficiently managed consistently, the security situation in Nigeria must be urgently resolved and the policy makers of Nigeria should set Nigeria on the part of a productive economy by enacting policies that will impact positively on SMEs and the manufacturing sector while also improving on the level of infrastructure across the nation and creating the right environment for all industries to thrive.”

“This is the time government is expected to throw open it’s grain reserve to supply to the populace to moderate the inflation rate. The country is passing through a difficult period and unless something is done, inflation rate may still rise up till about September when farm produce will be available.”