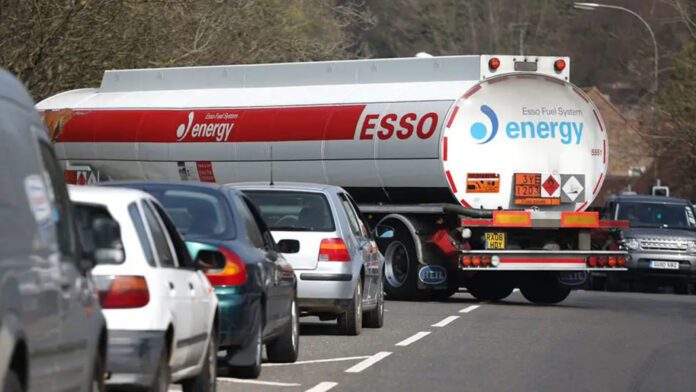 CEM REPORT | A report has revealed that an estimated 15.64 million litres of petrol are smuggled out of Nigerian daily.

The report alleged that the 15.64 million litres smuggled daily on an average is as a result of incentives created by fuel subsidies.

Explaining the possible cause of this, the report says that Nigeria’s petroleum products retail at 3.7x lower on average when compared to neighbouring countries, and this has created undeserving arbitrage opportunities for smugglers.

”As of August 2021, the NNPC put PMS domestic consumption at 56.44mn on average per day. In-house in Chapel Hill Denham, we believe the actual number is at least 28% lower. For context, we estimate Nigeria’s actual PMS consumption at 40.6mn litre per day on average, with the balance smuggled to neighbouring West African countries.”

“this is possible owing to the collapse in the “Law of one price”, which states that an identical product should trade at an identical price, irrespective of the location, once the exchange rate has been factored in. Since Nigeria’s petroleum products retail at 3.7x lower on average when compared to neighbouring countries, this created undeserving arbitrage opportunities for smugglers.”

Consequently, according to the report Nigeria subsidises fuel for other countries.

“Against that backdrop, Nigeria now effectively subsidises PMS products for the consumer in other countries while also preventing the formation of a legitimate market for cross-border PMS transportation and sale. With Dangote refinery, we believe change is imminent.”

The report reveals that Nigeria stands as the eighth nation in the world with the cheapest gasoline prices, adding that Nigerians spends $0.42 a litre, according to the survey. Stating that this is a result of the FGN heavily subsidizing imported goods.

“Subsidy removal may exacerbate the already pressured inflationary movement but the positive pass-through of a stronger fiscal position may help limit the impact on vulnerable Nigerians. To see the potential impact of a deregulated downstream oil sector on headline inflation, we ran monthly average PMS Price data on consumer prices movements over the last 20 months, we found that a N1.0 increase in PMS Price can potentially trigger a 22bps expansion in headline inflation, a test that is significant at 5.0% level.”

“Going by the figures we obtained from the World Bank, Households in the bottom 40% of Nigeria’s income distribution account for less than 3.0% of all white product purchases. For proper context, 75% of all petrol products sold in Nigeria is consumed by private firms, public transportation services, government agencies, and other business entities. Against this backdrop, one can potentially conclude that subsidy may have outlived its purpose.”

However, the report adds that some benefits can be achieved from subsidy removal, ranging from stronger oil export proceeds to better CAPEX spending and permanent solution to the incessant fuel crises in the country.

“While the preceding remains worrisome, we believe the FGN can protect the most vulnerable via a planned period of cash transfer. Nonetheless, we believe the economy can even reap a multitude of benefits from subsidy removal, ranging from stronger oil export proceeds to better CAPEX spending and permanent solution to the incessant fuel crises in the country.”

Recall that the World Bank and IMF have called for the removal of fuel subsidy but President Muhammadu Buhari recently defended the maintenance of fuel subsidy.

Although, the report revealed that the Dangote refinery, when completed, will be the largest in Africa, surpassing the Skikda refinery in Algeria (366kb/d capacity) and Nigeria’s current largest refinery, the Port Harcourt Refinery (210kb/d capacity), adding that the refinery will offer a ray of hope amid the recent fuel crises, which have been made worse by the FGN’s failure to refine even a drop of crude oil locally,

Chapel Hill Denham in its report explained that Nigeria is still largely dependent on imported fuel despite having four refineries with a combined capacity of 445 kb/d. However, at full operation, the Dangote refinery is expected to generate up to 66 million litres of PMS, ATK, AGO, HHK, slurry, and other petroleum products with a capability to refine 650 kb/d of crude.

“We believe change is imminent, with the Dangote Refinery looking to begin operation towards the twilight of 2023. If fully utilised, we believe the refinery can redefine Nigeria’s domestic production of white products(petrol, Automotive Gasoline Oil, AGO and Dual Purpose Kerosene, DPK) and potentially turn the country into a net exporter.”

However, economists at Business Day, predicts that the economic impact of the refinery would not be felt until after 2025 when the refinery achieve full capacity.

They explained that if the refinery starts this year, it will produce only 10 per cent of its capacity, and 20 per cent next year. The economist adds that under these assumptions, the refinery’s addition to growth measured by GDP is more likely to be 0.1 and 0.4 percent in 2022 and 2023, respectively.

The President of Dangote Group, Aliko Dangote, has said that the refinery can meet 100 percent of the Nigerian requirement for all liquid products such as gasoline, diesel, kerosene and aviation jet. It will also have a surplus of each of these products for export.

He added that after completion of all the projects, it would have the capacity to generate over 280,000 direct and indirect jobs.

Most Valued Passport in the World