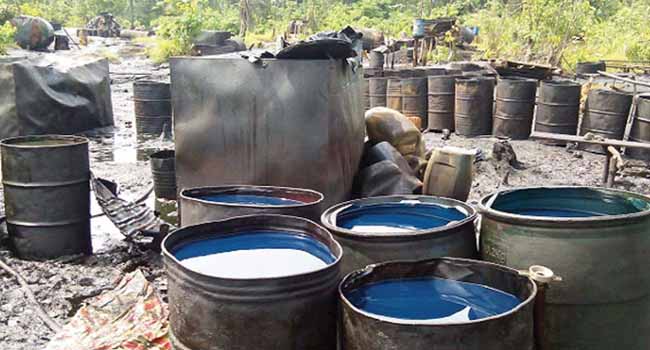 CEM REPORT | The Nigeria Navy through operation “Dakatar Da Barawo” has clamped down on an illegal crude oil market in Rivers.

Through the operation, the Navy recovered unspecified quantity of crude oil and four boats used by the illegal oil traders to transport their loot.

However, the operation was unsuccessful in making arrest of operators and workers at the facility.

He said the discovery was made, following the deployment of troops and military assets as part of its operation, “Dakatar Da Barawo” which means “stop the thief” in Hausa language.

“The market square was discovered following the launch of “Operation Dakatar Da Barawo” on April 1.

“The over 50 square kilometre market was used by oil thieves to illegally refine stolen crude oil before it was discovered and cleared by troops.”

He added that upon receiving intelligence about the existence of the market the navy deployed aerial surveillance to uncover where the operators sourced their crude from.

“Consequently, our tactical Riverine Squadron on Tuesday identified the source of the crude oil with the aid of aerial surveillance.

“On arrival at the market, we discovered that the oil thieves were stealing the crude from a manifold nearby,

“The crude oil was waiting to be cooked (refined) and loaded into boats or barges before we raided the market.”

The Commander further added that the troops were unable to spot operators and workers at the facility as they fled the scene on sighting advancing naval gunboats.

He celebrated the victory as a major step forward in cubing crude oil theft.

“The discovery was made possible with the support of the Chief of Naval Staff, Vice Adm. Awwal Gambo, who deployed resources at flashpoints to end such illegalities,”

“The discovery was a major victory for the Federal Government considering the current dwindling crude oil production in the country.”

According to NAN he also said troops were currently on the trail of the fleeing suspects and their collaborators to face justice.