Home Economy Navy Hands Over Seized Bags of Rice and PMS to Customs and... 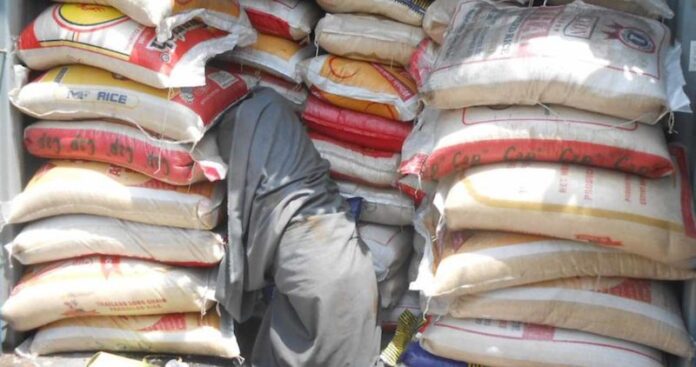 On behalf of the Commander of NNSV, Commodore Ifeanyi Okpala, Base Operations Officer of NNSV, Lt. Commander Clement Ayogu, handed over 252 bags of intercepted smuggled imported rice to the NCS at the Navy jetty,

Ayogu said the operation was carried out on April 16 and the hand over was as directed by the Flag Officer Commanding Eastern Naval Command of the Nigerian Navy, Rear Adm. Ibrahim Dewu, News Agency of Nigeria (NAN) reports.

He added that the bags of rice, worth over N9million, were intercepted off the Calabar Fairway buoy in Ebugu creeks.

Similarly, over 24 drums of suspected adulterated Premium Motor Spirit containing over 2,700 litres was handed over to NSCDC.

The Commander said the product was also arrested on April 16 by personnel of the NNSV at Ebugu creeks.

He added that the perpetrators fled on sighting the Navy’s gun boat approaching them.

“On sighting our gun boat, the perpetrators ran away. After thorough investigation on the matter, we are handing over the 252 bags of rice to the Nigeria Customs Service.

“The Nigeria Customs Service has the prosecuting right for these items, that’s why we are handing over the items to them.

The Commander further sounded a note of warning o perpetrators

“I want to warn the perpetrators of this illegal act to desist from it because the Nigerian Navy is ever ready to arrest them at any time,”

Deputy Comptroller of NCS, Mr Mustapha Kaliel, who received the items from the Navy, commended them for always sanitizing the maritime environment from all illegal acts.

He thanked the Navy for their effort and synergy and for always recognizing NSCDC as a critical player in the fight against adulterated petroleum product in the country.

Why Oil Prices Crashed Back Below $100