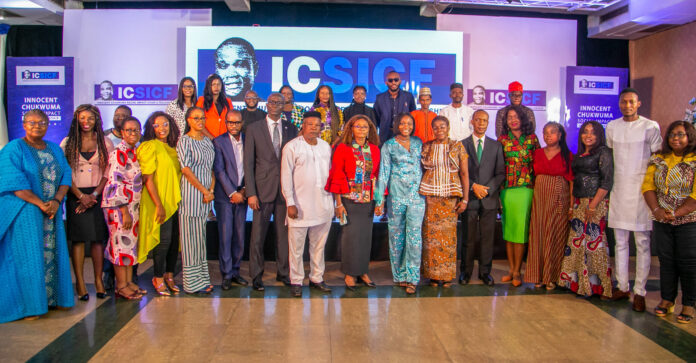 CEM REPORT | People are born, they live and die. In the midst of the majority that are never remembered after their death, are those few whose lives carved a mark in the heart of humanity that will live forever as the centuries roll by.

As simply puts by the Regional Director for West Africa at Ford Foundation, Catherine Chinedum Aniagolu-Okoye, “The essence of a man’s life is not the length of it, it is what it is that they have done with it.”

The life Innocent Chukwuemeka Chukwuma lived left so much impact in humanity that history would have been cheated if he was not immortalized, if not for others to continue to benefit directly, at least that someone may know of it and emulate it.

Lagos Business School and Ford Foundation launched the Innocent Chukwuma Social Impact Chair and Fellowship (ICSICF), to honor and perpetuate the character and vision of the man whose life could only be described with one word “Impact’, made in everyone that came across him and in every organization he worked or associated with.

The Launch of the Fellowship took place Friday May 13, 2022 at the Oriental Hotel, Victoria Island Lagos with strong representations from Lagos Business School, Ford Foundation, the Innocent Chukwuma family and associates of Innocent.

ICSIF, coordinated by the Sustainability Center, is established with a purpose to facilitate the emergence and development of the next generations of young social impact pioneers and social justice leaders in Nigeria.

The fellowship programme will support youths to catalyse systems and sectoral transitions in Nigeria through their social change initiatives in communities, social enterprises, nonprofit organisations, research, and influence on development policy implementation.

Dean of Faculty at Lagos Business School and Head of the Sustainability Center, Professor Chris Ogbechie, summarized the launch as a celebration of a decent, visionary and hardworking Nigerian, who lived a simple life while at the same time touching many young people, trying to help them to become better leaders and better Nigerians.

“Innocent Chukwuma Social Impact Chair and Fellowship” is an Endowment anchored by the Lagos Business School and funded by the Ford Foundation. The objective of the Fellowship is to identify young men and women who are doing something with a clear vision to impact humanity. The individuals are then funded to enable them do more in line with Innocent vision.

The event that lasted for about 3 hours was filled with the aroma of a sweet and impactful life pouring from the heart of those who truly had direct experiences with him from Civil Liberty Organization (CLO), CLEEN Foundation and especially from the Ford Foundation where Innocent Chukwuma worked for the last years of his life as a Regional Director.

Ford Foundation Regional Director, West Africa, Catherine Chinedum Aniagolu-Okoye, described Innocent Chukwuma as a gem whose impact made at Ford Foundation was meaningful and enduring. So the Foundation thought of how to immortalize him to ensure he is remembered in perpetuity. This is how the Fellowship was berthed.

Her appreciation to the West Africa Team and all those who worked tirelessly to actualize the endowed Chair was profound. She thanked LBS for accepting to hinge the work. She appealed to them, being a reputable organization, to ensure that they go beyond the fancy cities to also identify people who are in the rural communities who would never have had this opportunity.

Deputy Vice Chancellor (Development Services), University of Lagos, Prof. Ayodele Atsenuwa, on behalf of CLEEN Foundation expressed her delight over the establishment of the Innocent Chukwuma Social Impact Chair and Fellowship. Her joy is for the fact that unlike tenured Chair, this one is a Chair in perpetuity, which means, as long as the earth remain, that name Innocent Chukwuma is going to be there, impacting and enabling. It means because of the work that he did, some other people are going to have opportunity and resources to do the work that he envisioned and be able to respond to the needs of their own time 50 to 100 years from now.

Etemore Glover, Project Lead at Impact Investors Foundation, an organization Innocent Chukwuma was a Vice Chairman, explained how the organization was founded on the idea he sold to her sometimes ago while she was still in the NGO space. She described Innocent as a man who would sow a big idea and watch you run with it. She expressed appreciation to Ford Foundation and LBS for the initiative to set up the endowed Chair in honor of Innocent Chukwuma.

The joy of seeing Innocent Chukwuma’s name immortalized was unreservedly expressed by Mrs Josphine Efa Chukwuma, the wife of the late Innocent Chukwuma, as she gave a vote of thanks. She describe it as a light after a year of darkness for her and the children following the demise of her husband.

She described Innocent as a man who was in a hurry to impact humanity, who had so much in him as he would come up with an idea every now then, such that he would not rest until the idea is berthed.

“We are grateful to God for his strength. We are grateful to the Ford Foundation that accepted the demands I made which are establishment of this foundation in his name and publishing of his autobiography. They accepted it and that is why we are here today.

We are grateful to Lagos Business School for the length of work to get the endowment berthed. It has not been easy”; she said

CBN to Nigerians: Avoid Dealing with Illegal and Unlicensed Financial...