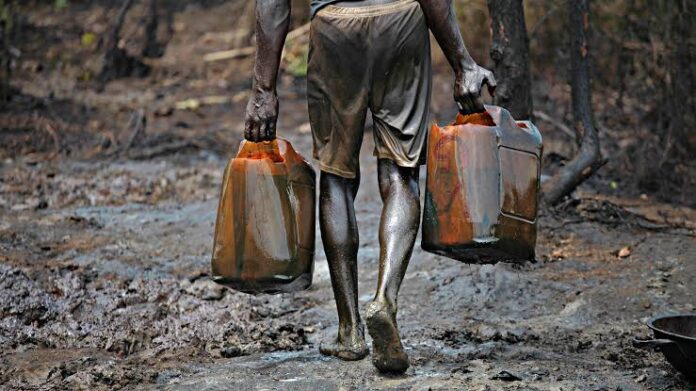 CEM REPORT | Nigeria lost about 3.5 billion dollars to crude oil theft in 2021, representing about 10 per cent of its foreign reserves.

This was disclosed in a report by News Agency of Nigeria on a webinar held Wednesday organised by Nextier Consultants with the theme: “Protecting Petroleum Pipelines: Strategy for Curbing Oil Theft in Nigeria.”

Some oil and gas experts have underscored the need for global collaboration, technology deployment and host communities engagement to curb oil theft in Nigeria.

The report also said that the country’s oil output currently dropped to an average of 1.24 million barrels per day (bpd).

Speaking on exploring pragmatic solutions to curb crude oil theft, Mr Joe Nwakwue, a petroleum sector specialist, said oil theft had become worst due to the response of the state to the challenges.

Nwakwue listed engagement of the host communities, application of technology (either satellite base or finger prints) and collaboration with global community as strategies to tackle oil theft issues.

“Theft of this skill cannot go on without the complicity of the society at large; the host communities know what is going on and our processes are not transparent enough.

“The assumptions in the Petroleum Industry Act (PIA) is that it will attract investments, that’s why royalty and tax rates were reduced and on one hand crude theft is sending wrong signal to the market. It should be addressed, otherwise, we will not see gains of the PIA,” he said.

Also speaking, Mr Thomas Kieler, European Union (EU) Adviser on Security, who called for more engagements of the host communities said it was committed to ending the oil theft issues through support programmes and dialogues.

Kieler said the EU had interest in solving Niger-Delta issues and was keeping close eye toward curbing the menace, adding that accountability, adequate manpower and investments were necessary.

Other issues discussed include building host community confidence and trust to enable them join in the fight against oil theft. This was raised by Dr Ndu Nwokolo, a social scientist

“Government should do enough to convince the people, rebuild their trust and allow them to join in protecting the assets,” he noted.

The economic wellbeing of host communities is a serious angle that require urgent attention if their collaboration must secured. They need to be properly catered for within the provisions of law.

“If you have ever visited these oil producing communities and see first hand the kind of poverty in these areas, you will understand why the issue is unending,” the participants said.

Achodo decried the fact that it militated against the country’s capacity to meet its quota given by the Organisation of the Petroleum Exporting Countries (OPEC).

He said the key discussion points would be documented to help policymakers and key stakeholders understand the status, gaps, challenges, and ways to mitigate the challenge.