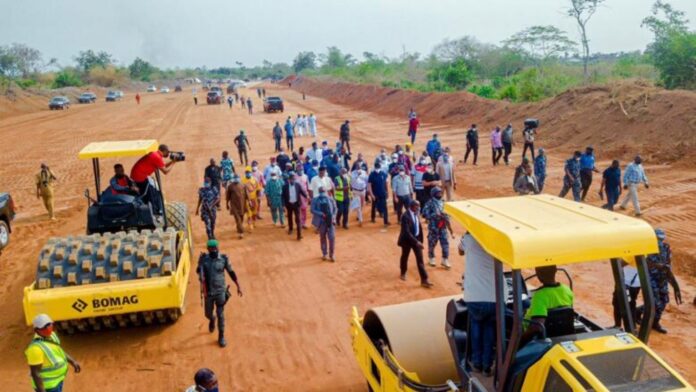 The Governor revealed this over the weekend when he conducted Gagan Gupta, Chief Executive Officer, Arise Integrated Industrial Platform, around the airport, at Illisan-Remo.

“This project started about 12 months ago and I promised that by God’s grace we will complete it in 18 months.

He said the airport would serve as a conglomeration to agro-processing companies, as well as an aerotropolis with added value services when completed.

“This is an aetropolis; it is not just an airport but also one that adds value services. The agro serving part is the most interesting, it is going to be a conglomeration of agro-processing companies that take raw materials, and turn them into finished goods. We will also have aggregation centres, and storage facilities for agro produce so that the agro-processing centres will not run out of raw materials.”

He also said, the airport would provide facilities for cargo processing, storage, warehouses, and training centre, among others.

“This is truly an international cargo airport. At the stage it is, it is already attracting a lot of attention and investors. The Nigeria Customs Service and the Nigerian Air Force have requested 100 acres of land to build their base and training school. Others have signified interest to build warehouses. Cargo companies have also applied to have their presence here.”

He futher stated the airport would create 30,000 jobs.

“Those willing to go into the hospitality business have applied to build hotels. We will also have demonstration farms that would be run through an out-grower scheme. That is the entire gamut of what will be seen here, I don’t have any doubt that this airport in the first instance, will generate over 25,000 to 30,000 jobs,”

Governor Abiodun, expressed delight in the level of work, he maintain that the project would be highly beneficial to the economy of the state and the country. He also stood optimistic that the project will deliver on schedule.

“We have gone round and see that the control tower is gradually coming out from the ground; we have driven on the runway, which is four kilometres, and have seen where the apron is. There is the administrative building of the control tower.

“Coming into the airport itself, we drove on the access road which is three kilometres, the runway is being asphalted. I am happy with the project and impressed with the speed and quality of work the contractors are doing. I don’t have any doubt that this project will be delivered on schedule, which is the end of November or first week of December,”

“the project when completed, will not only have multiplier effects on the economy of the state, sub-region, but the entire country.”

While maintaining that his administration would keep to its promises, he noted that,

“when we came here last year, we made a pronouncement that we will build this airport. The naysayers said it was a political statement but you all know that in our usual style, we are a very deliberate and focused administration. We only make promises we can keep. We did not promise to do everything but everything we promised, we will ensure that is done. This is yet another testimony of the promise made to the good people of our state.”

He futher mentioned that a Memorandum of Understanding has been signed with Arise Integrated Industrial Platform, which is expected to invest over $400m at the processing zone, as well as the Olokola cluster.

Mr. Gupta commenting expressed satisfaction with the level and quality of work done so far at the airport, adding that his organisation was looking forward to participating in developing the state’s processing zone, in ways that would lead to the creation of more jobs opportunities for the people.