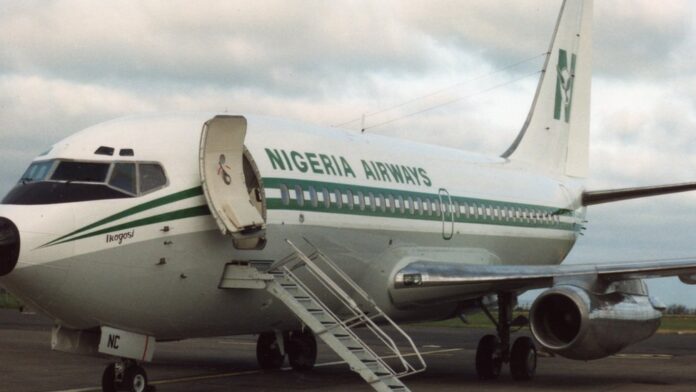 The former workers petitioned the Nigerian Civil Aviation Authority (NCAA) to stop the process of granting an air operating license to the new carrier until the Nigerian government fully compensate them and include them into the pension’s scheme.

Guardian reported that the petition is in response to the public notice inviting possible objections to granting approval to Nigeria Air.

The Federal Government in the process to float a new national carrier this quarter, had applied for Air Operator Certificate (AOC) and Air Transport Licence (ATL) to operate scheduled, non-scheduled passenger and cargo services.

As part of the procedure for ATL, the NCAA has mandated a public notice inviting any person or organisation with an objection to make such a request known within 28 days.

According to Guardian, one of the ex-staffers, Adams Adeyemi, told reporters that they had lost confidence in the leadership of the Nigeria Airways Pensioners (NAP) to protect their interest and mount pressure on the Federal Government to pay the last tranche of severance benefits.

Adeyemi said: “We are not against the setting up of Nigeria Air. What we are asking is that they should pay us what is left of what we are owed before a new national carrier comes on board.

“What concerns us is for the government to pay the remaining balance of what they owe us. We would have left this to our unions to do but they do not give updates on what is happening,” he added.

The group explained that out of the N78 billion owed them, the Federal Government paid N45 billion to the former workers, leaving a balance of N33 billion, which had been approved by President Muhammadu Buhari but yet to be disbursed.

They alleged that their union leaders under the Aviation Unions Ground Alliance (AUGA) were no longer motivated to pursue their cause, adding that the leadership got 45 per cent of N45 billion paid a few years ago as commission.

“We are suffering in silence. We heard that Nigeria Air is coming and we got a published notice that anybody who has an objection to why the carrier should not be granted a licence should bring it forward. We have written a letter. We should be sending the letter to the NCAA any moment from now,” Adeyemi said.

Another member of the group said: “We are demanding that workers of the liquidated airline that is still alive should be put under a pension scheme. The liquidation of Nigeria Airways was at the instance of the government. We believe that the leadership of our unions has been compromised. There are things that we see that show compromise.

“People in the Diaspora have resigned to fate. More than 80 per cent of ex-workers of Nigeria Airways have had broken marriages. Many have been left to their fate with many life-threatening ailments.”

Guardian reported that the struggle by the ex-workers of Nigerian Airways started since 2004 during the Olusegun Obasanjo’s administration. While their counterparts in Europe and America were almost immediately paid off by the Obasanjo government, the former workers in Nigeria and Africa particularly received their benefits piecemeal.

The protesters said that since the struggle started, over 2000 of the former workers had suffered to death with many left in miserable conditions.

A respite, however, came their way when Buhari through the Minister of Aviation, Hadi Sirika, finalised payment for the workers.