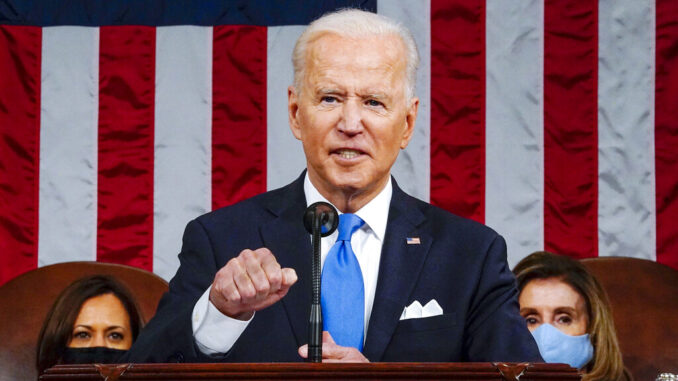 CEM REPORT | United States President Joe Biden Tuesday announced a ban on all energy import from Russia to U.S. This is said to be the main target at “the main artery of Russia’s economy”.

“We’re banning all imports of Russian oil and gas and energy,” Biden said in remarks from the White House. “That means Russian oil will no longer be acceptable at U.S. ports and the American people will deal another powerful blow to Putin’s war machine.”; He added.

The president said the U.S. had made the decision to ban Russian energy products “in close consultation” with allies around the world, particularly in Europe. He said many of those partners may not be able to take the same action.

“The United States produces far more oil domestically than all of Europe,” said Biden, who said the U.S. is a net exporter of energy. “We can take this step when others cannot, but we’re working closely with Europe and our partners to develop a long-term strategy to reduce their dependence on Russian energy as well.”

The executive order to ban the import of Russian oil, liquified natural gas and coal blocks any new purchases of those energy products and winds down the deliveries of existing purchases that have already been contracted for. The White House said the action also bans new U.S. investment in Russia’s energy sector and prohibits Americans from participating in foreign investments that flow into that sector in Russia.

The ban on new contracts begin immediately, and the administration is allowing a 45-day wind-down period for existing contracts, the official said.

The White House said the U.S. was able to take this step because of strong domestic energy production and infrastructure. Russian oil accounts for just under 10 percent of overall oil imports in the U.S., whereas it accounts for a third of imports in Europe, it said.

Before Biden’s remarks, the United Kingdom’s business and energy secretary, Kwasi Kwarteng, announced his government would phase out the import of Russian oil and oil products by the end of 2020

This transition will give the market, businesses and supply chains more than enough time to replace Russian imports — which make up 8% of UK demand,” he said in a series of tweets. “Businesses should use this year to ensure a smooth transition so that consumers will not be affected.”

Earlier Tuesday, Shell announced it would immediately stop buying Russian crude oil and would withdraw from its involvement in all Russian hydrocarbons, including oil, natural gas and petroleum products, “in a phased manner.”

Ukrainian President Volodymyr Zelensky thanked US President Joe Biden Tuesday for announcing the ban of Russian oil, natural gas and coal imports to the US.

Speaking in a video posted on Telegram on Tuesday, Zelensky reiterated his thanks to Biden, saying: “The United States has taken a step that will significantly weaken the invaders. It will make them pay for aggression and be responsible for the evil they have done. For all the evil. America bans imports of oil from Russia, petroleum products, gas, coal. Prohibits US citizens from any investment in Russia’s fuel and energy sector.”

He added, “I am grateful personally to President of the United States Biden for this decision. For this leadership. For this most powerful signal to the whole world. It is very simple: every penny paid to Russia turns into bullets and projectiles that fly to other sovereign states.”