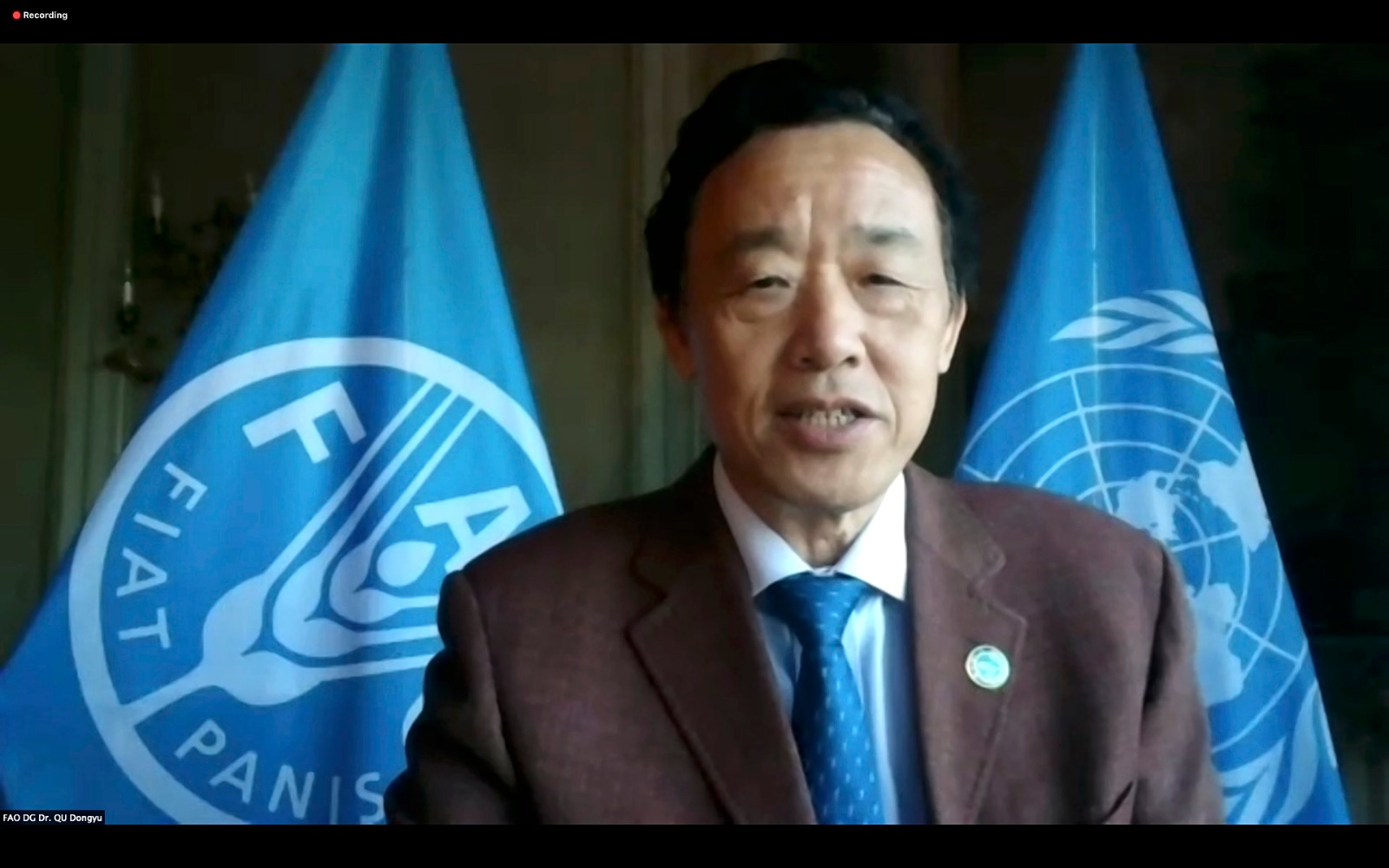 Director-General of the Food and Agriculture Organization, (FAO), QU Dongyu has called for joint regional action to tackle the impact of the pandemic in the Near East and North Africa at the ongoing 36th FAO Regional Conference for the Near East (NERC36).

The 36th FAO Regional Conference for the Near East (NERC36) started today in Iraq with a focus on improving nutrition, building resilient rural communities, optimizing water management, addressing the impacts of the climate crisis and fostering green recovery initiatives, as well as gender-sensitive development strategies.

In his opening remarks conveyed virtually, the Director-General said Agrifood sectors are among those struggling to recover from the shocks created by the COVID-19 pandemic over the past two years, and highlight the importance of sustainable and resilient societies.

“In the Near East and North Africa region, the pre-pandemic food security situation was already critical” with rising hunger and increasing inequalities jeopardizing the welfare of rural populations, women and youth, and worsening water scarcity, he said.

“Action at country level is the core of the 2030 Agenda,” Qu said, emphasizing the importance of partnerships and cooperation in achieving the 2030 Agenda.

“Dialogue, joint thinking, cooperation , partnership and the development of new strategies to deal with challenges, especially climate change, are among the priorities to achieve common goals,” said Prime Minister Mustafa Al-Khadimi of Iraq in opening remarks. “No society can grow at the expense of another.”

The inaugural session was also addressed by Muhammad Karim Al-Khafaji, Iraq’s Minister for Agriculture, the Chairperson of NERC36, and Hans Hoogeveen, Independent Chairperson of the FAO Council. The Director-General of FAO expressed his gratitude to the government and people of Iraq for hosting NERC36 during challenging times, and for delegations who joined the meeting in Baghdad.

“With the world experiencing the worst food crisis in 100 years, the FAO Regional Conference for the Near East will provide an opportunity to share expertise and review the capabilities of the countries of the region with a view to helping achieve food security,” the Iraqi Agriculture Minister, Mohammad Karim Al-Khafaji, highlighted during his opening speech.

“The conference’s output is expected to reflect positively on the future of agriculture in Iraq and to help achieve integration among the countries of the region,” he added.

The regional conference’s agenda includes several high-level segments with ministerial roundtables on core themes to be held today. Tomorrow’s agenda will include a side event on water, energy and food in the context of the upcoming COP27, followed by the adoption of a ministerial declaration and the report on NERC36.

The Director-General emphasized he has initiated institutional reforms at FAO to give regional offices more strategic power to ensure local action, and that flagship initiatives to support the Organization’s Strategic Framework are already at work in the region.

Three countries in the region are already participating in the Hand-in-Hand Initiative, which aims at increasing agricultural production in areas with the highest rates of poverty and hunger. Seven countries are participating in the 1000 Digital Villages Initiative, which seeks to reduce the digital gap faced by smallholders and rural dwellers, while the new One Country One Priority Product initiative, which focuses on products with unique qualities, holds important opportunities for implementation around the region, Qu said.

More actions are forthcoming, he added, as FAO develops a regional strategy on digital innovation and completes the Regional Technical Platform on Water Scarcity, which will become a knowledge hub on the subject allowing countries around the world to benefit from the vast experiences acquired in the Near East and North Africa.

FAO is also hosting a Coordination Hub to shepherd follow-up actions on the ground after the UN Food Systems Summit 2021.

In preparation for the Ministerial meeting, a Senior Officers’ meeting (SOM) was organized in virtual format in January. It was attended by 409 participants from 27 Members as well as representatives from the private sector, civil society and academia. The SOM was coordinated by FAO Assistant Director-General Abdul Hakim Rajab Elwaer, Regional Representative for the Near East and North Africa, along with senior officials from Iraq.