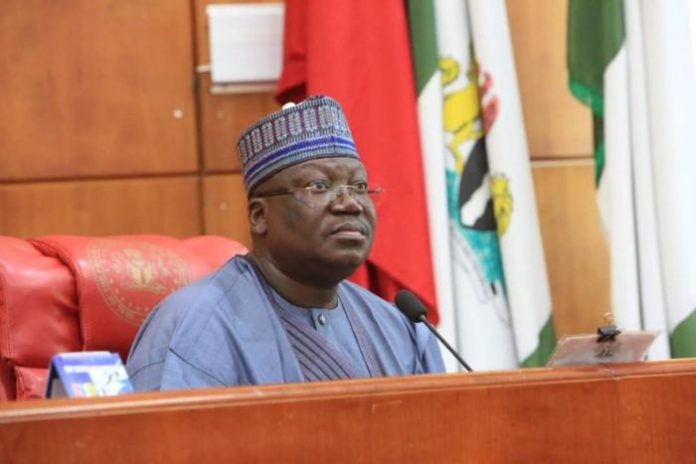 CEN NEWS
The Nigerian Senate on Tuesday called on the Federal Government to consider a comprehensive review of the power privatization policy with a view to reversing the current arrangement.

The Senate President, Ahmad Lawan, made the following remarks while calling for the reversal of the power contracts on Tuesday after the Senate had debated and approved a motion titled “Power Sector Recovery Plan and the Impact of COVID-19 Pandemic,”
sponsored by Senator Gabriel Suswan.

“We gave power to them (power generation and distribution companies) and they still come to the public to ask for funds.

“I think it’s time for Nigeria to consider reversing the privatization of the power sector or they should just cancel the entire privatization process completely.

“If we leave it, we may not have power for another 10 years.” Lawal Said.

The Senate President continued; “The privatization of the power sector has, so far, not been successful. We expected efficiency and something better. DISCOs have no capacity to supply us power. The Gencos have challenges too. We shouldn’t continue to give them money. They’re private businesses; we need to review this whole thing. Something is wrong.

“Our committee needs to investigate trillions spent. That’s a lot of money.

“Try to find out what has happened so far. Government needs to look at this whole thing. Maybe, government is not doing its own part. We need to find out.

“There is lack of capital, lack of investment. We feel very bad because we have no electricity and the country is suffering.”

A major target of the reform is to attain 40,000MW by 2020 backed by efficient distribution services by the distribution companies.

Indeed, there cannot be meaningful development in any economy without adequate power. The rule of thumb for an industrial nation is about 1MW for every thousand of population. This puts Nigeria’s energy needs in the 160,000MW range given its population of 160 million.

The industry is plagued by numerous challenges. As Precious Akanonu puts it, the entire privatization process is characterized by irregularities.

Primary to these irregularities, are

Low Electricity Pricing: The Multi-Year Tariff Order (MYTO) became too low to cover costs due after insufficiently accounting for increasing costs of generation and gas, and a weakening exchange rate for the naira. Cost recovery, and therefore return on investment, became impossible.

Liquidity Crisis: With GenCos and DisCos unable to recover costs, they were then unable to repay the $780 million borrowed from Nigerian banks for the initial purchase. Subsequently, the banks have been unwilling to provide further loans to GenCos and DisCos that would allow for investment in infrastructure improvements.

On December 12, 2018, the then Minister for Power, Works and Housing, now Minister of Power, Mr. Babatunde Raji Fashola, told Nigerians that it is really not the federal government’s problem if power supply remains poor across the nation.

Fashola complained that since the power sector has been privatized, all of the assets that the Ministry of Power used to control for power have been sold to private investors by the Jonathan administration.

This calls for major concern. In this regard, Lawan is right by saying that, “If we leave it, we may not have power for another 10 years.” This justifies is call for reversal of the privatization since the Federal Government cannot do anything about the contracts.

However, the Nigerian Electricity Regulatory Commission (NERC) headed by the acting Chairman, Dr. Anthony Akah, on Wednesday advised against Reversal of Power Sector Privatization. What is his reason?

Akah said that the Federal Government may not have money to buy back the utilities and may be acting in contravention of the agreement entered with the new owners. Any attempt to reverse sales of the utilities, he added, will send a wrong signal to potential investors.

What is the way out of this power quagmire?

Bold steps must be taken to address the incidences of vandalism, energy theft and scarcity of foreign exchange