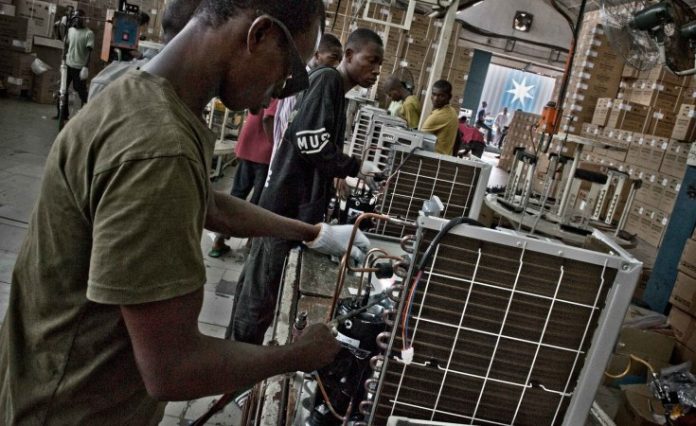 The aggregate Manufacturers CEO’s Confidence Index (MCCI) indicators fell to 44.4 points from 51.9 points recorded in the fourth quarter of 2019. This below 50 percent benchmark for the first quarter of 2020.

This is as contained in a report made available to newsmen by the Manufacturers Association of Nigeria (MAN) in Lagos, and published by “The Nation”

This whooping 7.5 per cent decline in the index which was attributed to anxiety in preparation toward eventual lockdown of the economy, underscores a near collapse of the manufacturing sector and a resounding vote of low confidence in the economy from manufacturers.

It also showed that the manufacturing sector was in a precarious state and required a lifeline to recover fully from the impact of the outbreak of the Coronavirus.

MAN, therefore, urged government to declare a state of emergency in the manufacturing sector and immediately place the sector on an integrated policy ventilator through the provision of comprehensive support systems and stimulus packages.

This, the association said, would swiftly return the sector to the path of sustained production.

“It is also now conspicuous that inherent capacities and inadequacies, that were hitherto not obvious, are now being revealed in the face of this unexpected sweeping change.

“It is, therefore, important and urgent for the government to declare a state of emergency in the manufacturing sector,’’ the report stated.

The report also revealed the following

The association stressed that some legacy business strategies scenario template would have to change to accommodate innovation that would replace the old order and facilitate the designing of an all-weather resilient business model.

MAN recommended that government establish a special bailout fund for the sector with set deliverable on the number of jobs to be created, the volume of export, quantum of locally raw materials utilised and projected revenue.

To reduce the financial pressure on companies, occasioned by COVID-19, MAN urged government to compensate manufacturing concerns that were forced to shut down with 60 per cent of employees’ salaries for at least three months to prevent laying off workers and heighten massive unemployment.

“Government should reverse the Value Added Tax (VAT) rate back to the pre-2020 finance act rate and reduce the personal income tax (PIT) to a flat rate of 10 per cent for one-year, effective April 2020.

“All regulatory agencies, especially Standards Organisations of Nigeria (SON) and National Agency for Food and Drugs Administration & Control (NAFDAC) should be directed to reduce their respective administrative charges to Pre-COVID-19 rates, payable by manufacturing concerns by 50 per cent,’’ the report added.